An Elf, a Dwarf and a Cleric Meet in the Tavern 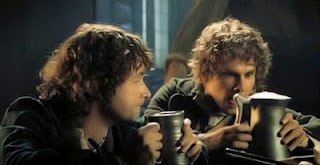 There's a spate of D&D posts in our space acknowledging that the apparent medieval assumptions underlying D&D aren't a great fit for the kind of society that produces free-wheeling adventurers; nor does it support an environment that allows the kind of autonomy and accumulation of wealth you see in our D&D stories.

It’s important to emphasize the context here is sandbox D&D; a style where a group of adventurers is free to gather rumors and information, plan their own exploits, and then go off and do them.  They're not lackeys of Lord So-and-So or retainers on missions from Baron Blah-Blah-Blah getting story awards for fulfilling heroic quests given by a patron; they're part of the middle class and they're interested in using their liberty to travel around and find loot.  I called these factors out as autonomy and frontiers some recent time ago when I was trying to create a list for myself that articulated what elements needed to be addressed, for a game to adhere to D&D's tropes.

The other caveat for the discussion here is historical inspirations; it appertains to D&D settings that model the structures and elements of a real-world period.  Thus we end up talking about things like adapting D&D to the early modern period, the Thirty Years, the Spanish Main, colonization of the New World, and so on.  My own campaign is currently in the Viking Age.

It’s fun to jeer about the cliché campaign starting off with an elf, a dwarf, and a cleric meeting in a tavern, but it's actually a pretty good litmus test for whether the milieu would support a good sandbox game; Frankish manorial estates in the early Dark Ages didn't have taverns and inns and well-established market economies, so there wouldn't be a place for an elf, a dwarf, and a cleric to meet up and plan an excursion in the first place.  It fails the tavern test.  Heck, I'll probably start using the 'tavern test' to evaluate the agency inherent in potential settings - if there's no place to get a drink and hire someone, without permission from the local authority, it's probably not ideal for a free-roaming sandbox.

Since the beginning of the blog here, the time periods I've discussed most often on my "setting wish list" all feature adventurers with great personal autonomy, markets and market towns, and open frontiers.  I just wasn't conscious of articulating the key attributes why they seemed like a good fit for sandbox games.


Noisms elaborated the discussion of autonomy and frontiers a bit further in this post, historical context of D&D, bringing in societal elements like unemployment or lack of opportunity at home, technological improvements that open new frontiers, and a high ratio of perceived reward relative to the risk.  New eras are suggested for adventures, ones I hadn't considered, like the colonization and discoveries of Africa or Asia by Europeans during the Victorian age.  Check it out, it's a good read.

If you're making your own sandbox fantasy campaign in a home brew world, you've probably assumed some kind of freeman class, markets and market towns, and frontiers, without a second thought to whether it aligned with any historical period.  Living in the first world, it's second nature to assume the setting will allow great personal liberty to the characters.  Of course the elf, dwarf and cleric, or a pair of halflings, will have a place to buy some ales and plan their adventures - and the ale definitely comes in pints.
Posted by John Arendt at 6:17 PM