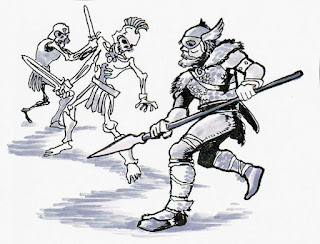 Lazy post today -  here's another moment from Saturday's Black city game captured on Felt's sketchpad.  I don't recount all of the details when posting a game recap, especially not all of the wandering monsters.  At one point, the group found themselves trapped in a dead-end hall by a "patrol" of skeletal legionaries wearing antique Roman armor.

Here's a picture of one of the characters, Bjorn, charging in against the skeletons with a spear.  (He quickly switched weapons when he saw the spear was doing minimal damage).

Thanks for the great sketch, Felt!
Posted by John Arendt at 8:00 AM