Game Report 23: To the Tower of Pain


After a few weeks hiatus, it's time to reconnect with my ongoing campaign, The Black City, in time for tonight's game session.  In the interim, I've been traveling for work; on another night, we couldn't get a quorum of gamers; on the next game night, we organized an at-home Magic the Gathering draft to teach all the kids how to draft a deck.  One of my side projects has become helping to get a Magic scene at the local comic store kick-started, as they hope to add more gaming and becoming more of a game club.

Here's a quick campaign primer on the Black City:  The Black City is a ruined alien city, on the frozen island of Thule far to the north of the Viking lands (I'm using real-world Spitsbergen for the island map, thus the players call themselves "the Spitsberg Pirates", tongue-in-cheek).  A seasonal trade town sits on the shore of a fjord near the alien ruins, supporting the numerous knarrs and longships that arrive each season to explore the ruins and dungeons.

At this point, the players are mostly 3rd and 4th level.  They've explored a few ruined structures on the surface, and most of the sprawling first dungeon level, the Transit Tunnels.  They're allied with an alien intelligence calling itself "Odin", and they've spent the last few game sessions exploiting resources discovered in the dungeons to gear themselves for deeper delving.  For instance, they used an alien plasma forge and a skilled craftsman from town to craft a few adamant blades for themselves.

The players had a logistical challenge to solve last game session; the captain who brought them to the island died in a tragic fire back at camp, their ship was damaged in the fire, and many of the crewmen abandoned them for other ships (along with about a quarter of the loot).  They returned to camp amidst the chaos.

Over the course of the campaign, the group has been building an impressive resume with the local jarl, performing progressively more dangerous services as opportunities arise; Agnar, the party leader, approached the jarl for help with their ship problem.  In return for an oath of loyalty, the party agreed to serve the jarl directly, and gain the protection of the jarl's hall (and a safe place to store treasure).  The jarl has an impressive fleet, and there's the chance to get a ship before the end of summer through salvage rights - it's not uncommon for entire crews to disappear in the misty ruined city, leaving behind an empty camp and vessel.

Dealing with all the roleplaying options and potential allies in camp, and finally settling on appealing to the jarl, took about half the game night; the second half began with the Mid-Summer Thing - a gathering of all the captains to hear disputes and grievances, vote on policy, and enjoy some of the jarl's hospitality.  The relevant bit that was revealed at the Thing was the abduction of a captain in the ruins by "winged terrors", and the helpless crew unable to get past the great glacier to the distant tower where he was taken.  The party plotted it out on the hex map, and saw that the location of the tower was above a dungeon tunnel that went beneath the glacier; they were calling the side tunnel that led to the place, "the winged terror lair".  The players had some previous success against winged terrors, and thought that this mission complimented their previous plan, which involved more scouting of the surface ruins.

It's a long journey across the ruins, to the "private" dungeon entrance the party uses to get underground, and then it's a few hours through the giant transit tunnels underground to the smooth-bored side tunnel that led to the winged terror lair.  Dank, hot, misty air wafts out of the smooth tunnel, pooling condensation and slime onto the floor and making the stone slick.  There's a sense the tunnel was cut through the rock wall through unnatural means.

The smooth tunnel leads about 30' into the rock wall before connecting to a large shaft vertical shaft.  The hot, dank, cavern air wafts up from below.  The party knows that a tropic, mushroom-filled cavern lies down in the darkness, but they haven't explored it yet.  Looking up, they saw a dim light about 20' up, just beyond the lip of the shaft - in other words, the shaft lead upwards into a structure on the surface, north of the glacier.  The Tower of Pain!

No one wanted to climb the slick walls of the shaft, so one of the characters hooked up a grappling hook and rope and tossed it up the shaft, trying a few times until the grappled grabbed onto the stone floor above.  The party also tied a safety rope around the character attempting the first climb, in case the grappled slipped.  The new halfling, Mr Ben Underfoot, made the climb.

The first floor of the tower was not vacant.

Sitting around the perimeter wall were a half dozen "things"… they looked like cobbled-together corpses, stitched and mismatched body parts of humans, apes, and other humanoids, without any heads.  An chitinous knob and a pair of antennae twitched in the place where a head should have sprouted.  Various metallic grafts were embedded into the flesh of the arms and shoulders as weaponry and armor.

Each body had a large, toothy mouth opening directly into the distended belly.  The things were lazily reaching to the side, to stacked piles of mushroom stems, and casually feeding mushroom bits into their own drooling belly-mouths.  They appeared oblivious to the grapple hook and the curious halfling peering over the lip of the shaft.  Nearby, cool air drafted into the room from a doorway leading outside of the tower, creating a bit of fog.

Mr Underfoot shimmied his way down the rope to the side tunnel, and conferred with the rest of the party.  Assaulting the shaft up a rope presented an unusual tactical challenge, so we ended the game session there so they could plan their assault with fresh minds.  Tonight.

BTW, would any aspiring artists out there care to take a stab at "headless servitors of the winged terrors"?  It's a strange enough monster to warrant a picture and could be fun to sketch - cobbled body parts, mutant grafts, and toothsome belly mouths.

Edit - here's an excellent sketch by Mr Nelson of the headless servitor, feeding mushrooms into the stomach belly.  Thanks! 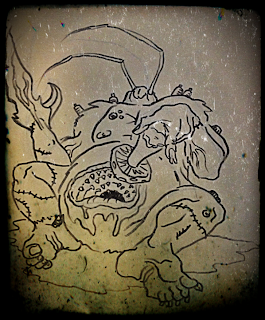