Speaking About The Unspeakable Oath - Reviews of Issues 21 and 22


The Unspeakable Oath is a pdf magazine published by Arc Dream Publishing for Cthulhu gaming - it's tag line is "a digest of arcane lore for Cthulhu mythos roleplaying games".  It's released intermittently - it comes out maybe once, twice a year?  But Issue 22 came out recently and I figured I'd do a quick review of the past couple of issues to give readers the flavor.  If you like Cthulhu gaming, this magazine is for you; if you like the horror genre and want ideas for use in other games, you can't go wrong here either.  It's one I enjoy quite a bit.  (You can find it at the usual suspects:  The Unspeakable Oath).

The Oath is usually 60-80 pages with content spread across a number of recurring features.  There's usually an interesting editorial column, a series of reviews, and standard columns introducing new artifacts, tomes, and "tales of terror".  I particularly like the tales of terror; they're short plot hooks that set up an ominous or horrible situation, and then offer the referee a couple of options on what's really going behind the scenes; one or two of the options is innocuous or a red herring.  Every issue has a few ready-to-go scenarios, as well. 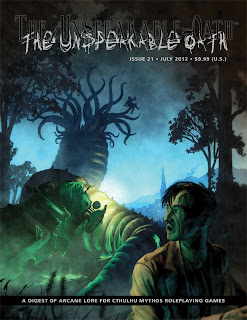 Issue 21
Highlights for me of this issue were the two scenarios:  "Sukapak", and "The Man With a Thousand Faces".  "Sukapak" is an atmospheric wilderness jaunt in a remote fastness; there's a lot of ambiguity around what's actually going on, but the scenario is menacing and disturbing (and could port well to other genres, too).  It reminded me closely of Algernon Blackwood's "The Willows", which I'm sure was an inspiration.

"The Man With a Thousand Faces" revolves around a haunted Hollywood star, his gift of impersonation fueled by a dark pact and a body curse.  The identities and physical transformations he's assumed through the years are growing out of his body like cancerous buds and speaking to him.  His mansion is littered with faces cut off his body, which continue to mumble their lines.  He's totally insane.  It's all fairly gruesome. 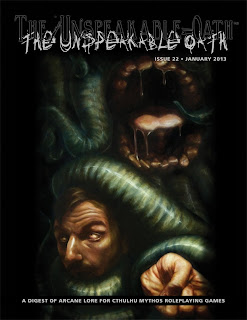 Issue 22
Issue 22 features a cool monster, the China Doll, a living doll-face that grafts itself to a victim, as tendrils from the mask burrow into the victim's brain and turn the victim into a puppet.  I'm stealing that one, for sure - disjointed, mask-wearing human puppets, ftw.  Issue 22 also had a lengthy article on kicking off a new Call of Cthulhu campaign and dealing with common genre problems.

The scenario, "Die High", features a high altitude monster killing people in skyscrapers and penthouses, and reminded me a lot of the "slake moths" from Perdido Street Station.  It's a neat modern scenario and would have to be run using Call of Cthulhu in the present day; it's probably a bit too hard to port to fantasy unless you’re running a setting like Eberron with tall urban towers and a bit of pseudo-tech.
Posted by John Arendt at 4:07 PM

Email ThisBlogThis!Share to TwitterShare to FacebookShare to Pinterest
Labels: Cthulhu, The Unspeakable Oath