Your Own Private Mythos 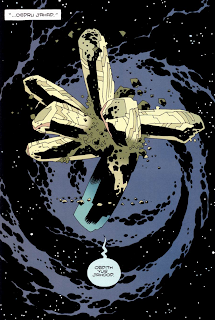 There's much common ground between something like LOTFP (a weird horror interpretation of classic D&D) and Cthulhu Dark Ages, which takes that classic Mythos investigation experience and roots it in a similar world of swords and armor, castles and monasteries. For that matter, we could put Cthulhu Invictus in the same conversation, with it's foundation in Roman history.

I've discussed some of the differences before; D&D characters advance primarily through earning treasure; if D&D guys are encountering eldritch horrors, it's likely incidental to exploring some crumbling place seeking money.  Cthulhu investigations might kick off with a job offer, but the campaigns usually become "save the world" affairs once the characters learn what's going on.  There are some other differences too - ritual magic vs Vancian magic, sanity rules and the sanity death spiral.  Both styles feature frequent character death, and the setting transcends the characters.  It'd be interesting to take a look at how the differing mechanics inform the divergent play experiences.

Today though, how about just looking at the presence or absence of Chaosium's bestiary?  Lovecraft's work is in the public domain, but Chaosium has licensed the creations of many post-Lovecraft writers who have extended the Cthulhu Mythos, providing the Call of Cthulhu keeper a vast bestiary for scenario building.  (See Malleus Monstrorum for an excellent Cthulhu bestiary).

There's a saying writers frequently quote - something like "constraints breed creativity".  It's the idea that it's much easier to launch into a short story on a guided subject than starting with a blank paper.  In the gaming space, much of the reason folks love random tables so much is the inspiration a few cryptic results on a table provide as a departure point for creation.

So I wonder whether the more fruitful exercise is to create Lovecraftian monsters whole cloth, establishing your own Mythos along the way, or building on the preexisting forms and reinterpreting them?  Would it be more fun, say, to find a creative new use for the Deep Ones, or Fungi from Yuggoth, as antagonists in a campaign setting, or start from scratch with an entirely new Mythos race?  There's an inspirational book, Stealing Cthulhu, by Graham Walmsley, that's all about suggestions on shuffling the deck of Mythos threats while reusing the building blocks of Lovecraft's stories and his signature creations.

There's a dynamic in Cthulhu game writing of obfuscating or hiding the tracks of the monsters, since so many of them are known quantities, and the game-within-the-game becomes that moment when the savvy players go "Aha!  We've identified the bad guy!"; the base bestiary is well known after 30 years, and enough peels of the onion are eventually revealed for the players to name the threat.  Using the known bestiary provides that creative framework for the writer, but also leads to a sense of accomplishment for the players when they piece it all together.  But the use of that existent bestiary doesn't further the cause of unknowable horror. It’s perhaps the opposite.

Let me see if I can reduce some of these thoughts to just a few bullet points, pro and con.  Please feel free to add more in the comments if there are important factors I missed:

I still don't know exactly what kind of custom campaign I'm doing after the Black City run; I mean, I promised the players we'd return to Gothic Greyhawk and pick up with one of the older campaigns for a bit, but beyond that, I'm obsessed with moving forward with a horror-themed campaign.  Otherwise, I'm a hot mess - switching gears between the Caribbean, gothic Yorkshire, colonial New England, and so forth - pages of campaign idea stubs littering my notebooks.  However, I've been catching up on so much Chaosium reading lately, it seems natural to ask - why not just use the Mythos, regardless of system?  On the other hand, I'm a huge fan of Mike Mignola and the Hellboy universe, and Mignola is an example of a creator that's used Lovecraft's themes to create a mythology and universe with wholly new creations to great success.  It can certainly be done.  I highly recommend BPRD and Hellboy if you like pulp horror comics.

What do you guys think?  Seems like a good time for a new poll - Lovecraft monsters are somewhat popular out here on the blogs, are you most interested in a creative use of an existing entity or creating something new?