Review: The Gnomes of Levnec 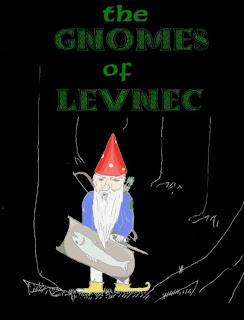 The Gnomes of Levnec is an adventure about the fate of an empire and the byzantine machinations of a court that no longer has a monarch.

I really enjoyed this one.  The Gnomes of Levnec is a short adventure, 16 pages, but you get a lot of value in those 16 pages. The book details a small adventuring area set around a remote village, Levnec.  Within is described the village, a handful of characters, the nearby woods, and a few adventuring sites in said woods.  The village has fallen on hard times, starvation is a problem, and the toymaker, a gnome, has been murdered.  Worse, did some of the starving villagers actually eat the toymaker?  There's an opportunity for a bit of investigative role playing.

The author, Zzarchov Kowolski, incorporates a lot of humor into his writing style, and Gnomes is an entertaining read.  There were a few times I caught myself laughing during the read through, and immediately knew I'd slot this adventure into any upcoming low level campaign.  Between the investigation, the village, the woods, and the adventuring sites, there are quite a few interesting things to do, and the sense of dark humor and whimsy seals the deal and makes this a winner.  There's also a nifty gnome recipe.  Running this adventure will be entertaining for the referee.

On the other hand, check out that cover.  You might think a hand drawn gnome picture demonstrates some OSR hobbyist charm.  If so, you'll be fine with the presentation of this adventure.  If you require commercial game books to have high production values, take your $2.85 somewhere else.  The maps and pictures are rough, and the writing could use some editing.  None of that affects the game play, nor does it detract from the subversive humor throughout the adventure.  Don't miss out on some fun because something isn't "professional enough".

The Gnomes of Levnec is available at the usual suspects (RPGnow: The Gnomes of Levnec).  It's for low level adventurers and will work well for any referee setting up a sandbox area who has space for an outlying village.  It's system neutral and can be used with any old school version of D&D or clone game with no fuss.  I'm recommending it.
Posted by John Arendt at 6:56 AM