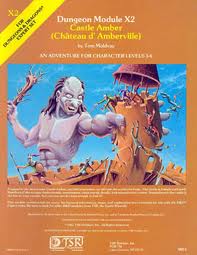 This isn't exactly a review… consider it more of a commendation or eulogy.  I'm a big fan of module X2, Castle Amber.  It was one of those early 1980's D&D modules, written for the BX Classic D&D game by one of my favorites from back then, Tom Moldvay.  Officially it's for character levels 3-6, and it came out for the Moldvay Basic set and Cook Expert book (the red and blue books).

Castle Amber is a bizarre funhouse dungeon.  The basic idea is that this large mansion (Chateau D'Ambreville) has been cursed, along with all of the inhabitants, and now it's untethered from space and time.  When it briefly touches other planes, beings from that reality can enter the mansion and find themselves trapped as well.  Ostensibly, the players wander through a cloying mist while on some wilderness hex crawl and find themselves within the reality of the castle, seeking a way out.

The inhabitants of the mansion are either extra-planar visitors like the players, or the powerful and insane remnants of the Amber family (many of them magically altered with animal heads).  About halfway through the adventure, the players get the opportunity to leave the mansion and visit a realm like Medieval France - the province of Averoigne - taken straight out of Clark Ashton Smith's Averoigne stories; many of the literary characters from the weird tales show up as important non player characters.  Rounding out the literary roots of the module, there are also a number of direct homages to Edgar Allan Poe stories in the mansion.  When you need to steal, steal from the best.

Castle Amber has a curious and intriguing relationship with "game balance".  On the tin, the contents say the adventure is for "3rd level characters", but many of the Amber family members are 10th level or higher and not opposed to a little of the old ultraviolence.  You don't always have to fight them.  They're batshit crazy and chaotic, and much of the charm in this particular module is giving the referee free reign to portray these unbalanced and idiosyncratic mad people.

I just finished a post earlier in the week where I dressed down the BX version of the fighter as a poor combat threat… sure, sending a 10th level fighter at a party of 3rd level characters sounds unfair, but the clerical Hold Person spell is a real thing.  Wolf pack tactics are a real thing.  Because a fighter does such a low amount of linear damage, these encounters are attrition challenges, wearing down a powerful but solitary antagonist, while trying to manage damage on the party side.

Dealing with 10th level magic users is another matter.  When negotiations and parley fail, it comes down to initiative rolls and prior planning, and whether the party can disrupt the magic user's tempo (causing spell failure through damage before spells go off and kill everyone).  Otherwise the player characters tend to die in big numbers.  The combats with the high level fighters are analogous to drawn out chess or boxing matches; fights with the magic users are gun fights, nasty, brutish, and short.  The NPC magic users have poor armor class and few hit points, and fall quickly to a frontal assault, assuming the party dodges that opening salvo.  It's never dull.

I keep tinkering around with "Harrow Home Manor", one of my previous mega dungeon ideas, and it’s shaping up to involve the lairs and sanctums of many powerful and idiosyncratic mages in the hoary depths.  This idea of damage output and game balance and fighters versus magic users, has been front of mind.  I couldn't help but circle back and see how it was handled in Castle Amber.  (To recap:  powerful opponents are scattered throughout Castle Amber with utter disregard for balance.  Works for me). 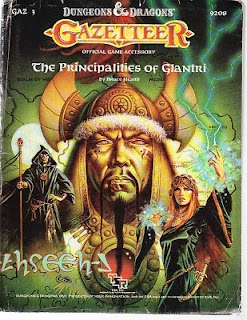 Incidentally, Castle Amber has an interesting place in the history of Mystara, the BX "Known World".  As the setting developed, the events of the module were placed some 100-200 years in the past.  At the time of the Gazetteer series, the Amber family has been long restored, and is one of the leading powers within the Principalities of Glantri.  The last time I ran a Mystara campaign, one of the plot lines involved the characters getting a job offer from a powerful wizard (the future version of Stephen Amber) to go to the correct place and time to encounter the castle, which was spinning through time and space.  Stephen knew it was the players who would return the castle to it's rightful place (200 years ago) by solving the curse, and so he made sure he himself was in the right time and place (in the future) to encounter the players and encourage them to take up the mission with gobs of money.  There was a great moment at the end when the players realized the guy they rescued when they escaped the castle was a much younger version of the mysterious patron that originally sent them.