Everyone gets everything he wants. I wanted a mission, and for my sins, they gave me one. Brought it up to me like room service. It was a real choice mission, and when it was over, I never wanted another.

I was going to the worst place in the world and I didn't even know it yet. Weeks away and hundreds of miles up a river that snaked through the war like a main circuit cable...
--Willard, from Apocalypse Now

I've been catching up on some RPG reading.  A few weeks ago I had gotten a big box from Finland with the hardcover LOTFP rules books, along with Qelong and The Seclusium of Orphone of the Three Visions.  I've since read them, and am ready to discuss.  Let's start with "Qelong". 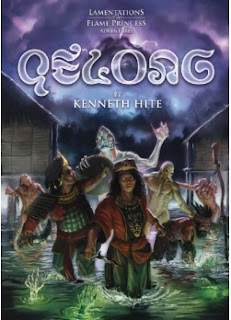 Qelong is a hex crawl setting that describes a war-torn jungle area inspired  by South East Asia, specifically Cambodia.  It's fairly high concept.  Imagine Apocalypse Now, but instead of two warring (modern) nations, the super powers are a pair of god-like wizards, devastating the areas beyond Qelong's border.  Sometimes their attacks are deflected and go astray, careening into adjacent territories like Qelong.  The Qelong River Valley has been poisoned by a magical super weapon that tumbled out of the war zone and now leaks it's destructive power into the environment, poisoning and mutating the inhabitants and awakening the dark powers that slumber in the earth.

It's assumed the players are outsiders that come to Qelong for… reasons.  Perhaps a patron knows about the errant super weapon and wants it recovered, or they're do-gooders out to fix the ecological disaster by removing the taint.  For looters and raiders, there are refugees, abandoned temples, and a lost mine to sack.  The book assumes the DM will employ some creativity and account for the aspirations of the players when designing appropriate reasons for the players to visit Qelong.

The presentation of the hex crawl material is slightly different than the standard treatment.  Instead of a laborious catalog of numbered hexes, Qelong is presented through 10 major destination locations, and then random encounter tables by terrain type (along with practical ideas for making the terrain types interesting).

The core of the descriptive material is the handful of factions at work in the valley.  These are the powerful rivals with whom the player characters will have to fight or negotiate.  There are the Lotus Monks, remnants of the area's religious orders (and yes, they're flush with cool martial arts powers).  The Myrmidons are a gruesome, parasitic, ravaging army, insect soldiers created by one of the great powers, that angled out of the war zone and are now cutting a path through Qelong.  They seek hosts for their eggs.  My favorite group was the Varangians, tough mercenaries from the west that are exploiting the chaos to loot the region.  They have a giant flying construct, the lich-garuda, and similar war machine constructs - queue Wagner's "Ride of the Valkyries".

The book contains the mechanical bits you'd expect as well - rules for disease and "aakom poisoning", the name of the magical contaminant leaked by the super weapon.  There are lots of new monsters, themed from Asian mythology; nagas and angry ghost variants headline the monster section.  There are name tables to help the referee generate flavorful NPC names on the fly.

Qelong is 48 pages, softcover, and is nicely laid out, with art by Rich Longmore.  This one is for mid level characters, in the 4th-6th level range.  You can get a pdf copy at the usual place (RPGNow:  Qelong) or a hard copy at the LOTFP store.  It's by Kenneth Hite, a prolific horror writer in the Cthulhu gaming space, and the choice of placing a sandbox setting near fantasy Vietnam is unusual.  Ken is an avowed fan of history; this is a clever way to hold the mirror up and explore some underused themes in gaming.

How do I recommend this one?  As I said near the intro, it’s fairly high concept (and perhaps narrow) but the material is thought provoking, well presented, well written, and offers a radical alternative to the dungeon crawl.  How many campaigns support access to an Asian-themed war zone?  The idea of warring super powers, and mercenary companies with war-constructs, implies a higher magic world than many campaigns (albeit "grim and gritty") than a low fantasy setting. The referee could have characters teleported to the region via a high level patron, or even travel to the world of Qelong through planar travel, for instance.  It's ideal for a jaunt.  It fits the whole "Heart of Darkness" theme to have 'ordinary' characters from the world thrust into the war zone, not fully understanding what they're getting into when they accept the mission.