An Introduction to THEROS 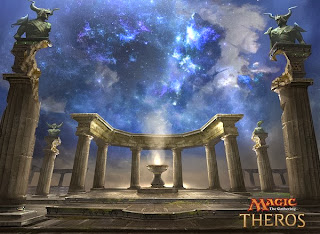 Last weekend, the next block of sets for the Magic the Gathering card game kicked off with Theros, a setting strongly themed after Greek mythology - gods, minotaurs, gorgons, hydras, the whole thing.  Magic is a gaming industry juggernaut, and the Wizards creative team does a phenomenal job of world building as they introduce these new settings - the blend of art, mechanics, story, and a splash of flavor text pull the whole thing together really well and fire the imagination.  Every time I encounter a new set, it gets me thinking how to borrow ideas for the RPG games.  I actually can't recall too many successful (or popular) settings based on Greek myth in the old school space.  Let's take a look at what Magic is doing with Theros, and then see what kind of ideas can be borrowed for your RPG. 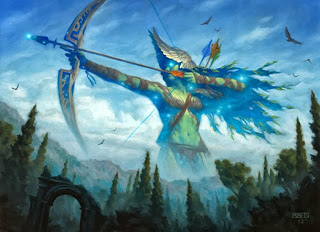 The gods of Theros dwell in the night sky, the starry realm of Nyx.  This is an elegant way of tying in the constellations with the homeland of the gods, and gives the artists a reason to depict all the gods and their enchantments as being made of stars, like "Eternity" from Marvel Comics.  I also like this approach hearkens back to a view of the world that includes "mythic geography", where the mortal world and the divine realms are coterminous.  Climbing a high mountain really puts you in touch with the realm of the gods. 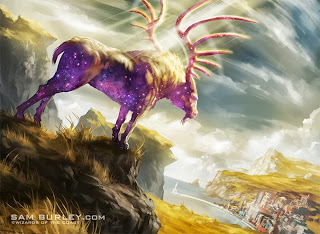 The power of the gods manifests in the game as "enchantments", one of the MTG card types, and there are a lot of new "enchantment creatures" that represent creatures infused by divine power and the realm of Nyx.  Furthermore, most of these creatures have an ability called Bestow, meaning they can be used to power up one of your own other guys, or exist on their own.  To put it in English:  divine power can be bestowed to one of your characters, boosting it into a huge beater, or it can manifest on it's own as a living enchantment.  An example here is the Emissary of Heliod (Heliod is the Theros sun god) - one of your other creatures can take on the powers and become Heliod's Emissary, or you can summon Heliod's Emissary as a stand-alone creature.

Here's an implication for our RPG's:  instead of focusing treasures and rewards primarily on magic items, couldn't bestowed benefits from the gods take a similar (mechanical) role in the RPG?  Greek myths imply a world where the gods are active participants; the gods of Homer's Iliad are directly powering up their mortal heroes for the battlefield.  Instead of earning that boring +1 sword, the fighter who consecrates a great victory to Ares at the war god's dark shrine gets touched by the god so that any spear he uses acts as a +1 item because of the god's favor.  A thief in the service of Hermes might get a one-use divine invisibility boon - essentially a Potion of Invisibility, but with a flavor that ties better into the setting.  Hecate might grant a loyal magic user a one-use Animate Dead in lieu of finding a magic user scroll.  And so on.  I need to think it through further, but I like the implications and setting flavor.

There are a few more Magic mechanics in the new set that are awesome for the mythological flavor but harder to pull off in an RPG; two examples are Scry and Devotion.  Scry allows you to see the top cards of your deck, a nod towards prophecy and foresight.  It's awesome to call to mind a world of oracles and divine visions; unfortunately, prophecy is hard to pull off in an RPG (just look at how messy and used spells like Augury tend to be).  I've done some prophecies successfully in the past, but it warrants a larger \ longer post. 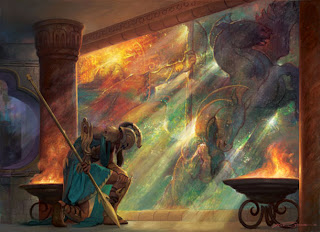 Devotion allows you to gain additional game benefits by being strongly aligned to a certain color of cards on the battlefield; it's basically like being "all in" on Zeus, or Apollo, and getting an extra benefit by showing the loyalty.   The whole cleric class is problematic in D&D for a slew of reasons, not least of which is the general discomfort of a referee having to make some judgment calls whether the player's role playing is line with the god's ideals.  Now imagine extending that to cover all the classes.  However, there might be a way to identify a series of objective accomplishments any characters could perform that would get their god's attention and shower a little love their way - some well-known, stock actions characters can demonstrate to show the love.  I'll need to think about it. 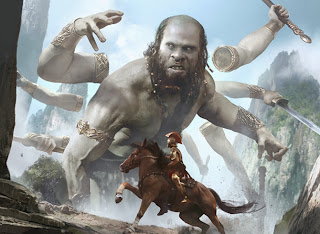 The last two new mechanics are Heroic and Monstrosity, and both affect creatures.  Both types of creatures progress from  their base state into something bigger and better - Heroes are mostly human creatures that get a small personal boost while improving the rest of their team; Monstrosities are beasts that get gigantic and go on a rampage.  The whole class-based level system in a Dungeons & Dragons style game already works well to describe the hero's arc.  When I think about implementing "monstrosity", I'm drawn to having more unique and legendary versions of monsters that represent "boss fights" that act as capstones to an adventure, rather than regular encounters.  However, the Magic flavor of monstrosity is usually a dangerous monster that goes into overdrive, so it might be worth modeling that in the RPG stats.

Here's a big consideration:  How would you structure a campaign inspired by Greek Myth?  My first inclination is that it would primarily use the hex crawl style - legendary locales and mythological sites spread far and wide.  If 1960's "sword and sandal" movies have shown us anything, you have to travel far from the cities of man, to a remote ruin, and there confront the legendary stop-motion claymation monsters in a crumbling ruin.

I really don't like running a whole campaign as a hex crawl.  Travel exposition is difficult or mind numbing, and the infrequency of wilderness encounters creates a "5 minute workday" problem around appropriately challenging the players.  I don't think we have the hex crawl technology right yet.

How about a gigantic, Greek-themed dungeon?  Labyrinths feature in the myths.  How about the sprawling workshops of the forge god (filled with mechanical clockwork monsters).  The mythic underworld could actually be the entrance to The Mythic Underworld.   Hmm.  Ideas are taking form.

I'll see what I come up with.  In the meantime, if you want to bask in the Theros flavor, the entire card gallery is available at the Wizards of the Coast site, and you can read the introduction to the plane of Theros by the Wizard's creative team in their Planeswalker's guide articles:

Let me know if you've played any Theros in the comments and what you think of it so far!


*All images and creative is copywrite Wizards of the Coast and the respective artists.  (Nykthos by Young Park, Nylea by Chris Rahn, Heliod's Emissary by Sam Burley, Chosen by Heliod by Zach Stella, and Hundred Handed One by Brad Rigney)