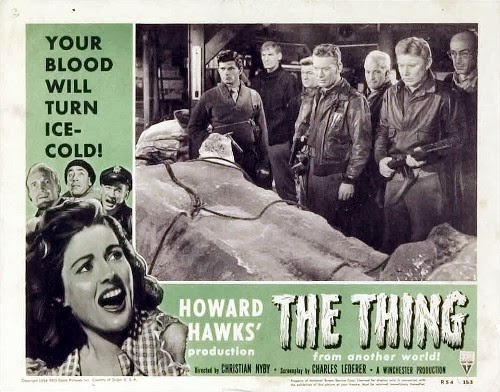 Musings on The Thing From Another World

My oldest son graduated from listening to bedtime tales a few years ago, relegating my nightly read aloud episodes to the two little ones;  however, the process of exposing him to great stories continues unabated.  He's become an avid sci fi reader, and we've been trying to work the occasional movie classic into the mix as well.  Movies from the 50's are pretty safe as far as content, so science fiction stalwarts like Them!, Invasion of the Body Snatchers, The Day the Earth Stood Still, and The Thing From Another World are in the queue.

Does everyone remember the original The Thing?  A UFO crashes in the ice, some soldiers and scientists at a remote arctic base uncover an alien encased in ice, the alien escapes its icy confinement and starts hunting the isolated humans, using their blood to grow an army of things.  It's a classic set up for a horror story.

What struck me so much on this recent viewing were the gobs of political propaganda.  Scientists are depicted as reckless maniacs willing to sacrifice anything to make peaceful contact with the monster; the air force soldiers are the stalwart heroes, drawing a firm line and refusing to bend in the face of outsider aggression.  The message is clear:  don't trust scientists and intellectuals; scientists created the atom bomb which led to the Cold War; intellectuals want to appease the socialists and the communists and the dictators of the world.  The army, on the other hand, toppled Hitler, saved West Berlin, and will halt the advance of communism wherever it rears its head - making sure no more dominos fall.  It's pretty much all right there in the film - a snapshot of early 50's psychosis just beneath the surface.  "Watch the skies, everywhere! Keep looking. Keep watching the skies!"

I can't wait until we watch Invasion of the Body Snatchers.  Oh no, there's a communist under my bed!  Jinkies.  I did have the chance to spend time with the kiddo talking about life growing up in Cold War America -  what a different world it was back then.

Horror is a fairly conservative genre.  A lot of stories involve punishment of transgressors by the monster - characters that cross a written or unwritten rule invite doom down upon them.  Don't pick up hitchhikers, don't go make out in the woods as a teenager, don't creep into the neighbor's house and try to prank them.  Don't open the book of forbidden knowledge.  The nail that sticks out is the one that gets hammered!  It can be a bit tiresome.

And yet… it's so dang effective to use this approach in dungeon designs.  The players do it to themselves, amiright?  I didn't make them climb into that dank pit seeing if there was a magic goodie in that chest, they did it to themselves.  Who knew the floor of the pit was a Mimic?

Our steady heroes in The Thing From Another World also invited the horror into their base camp.  They could have blown up the thing in the ice, but they wanted to study it, see what they could learn.  Even a straightforward sci-fi yarn like The Thing ultimately involves destruction ensuing inexorably from a quest for blasphemous knowledge.

I asked the kiddo what he thought of the movie.  "The monster was kind of dumb - it just strode around like Frankenstein, bashing things and snarling.  No way could that thing pilot a space ship.  The real aliens are still out there.  What they do is put these bio-engineered mindless killing machine vegetable monsters on flying saucers, crash them into somebody else's planet, and then let the monster go to work smashing things in advance of the real invasion.  The scientists were trying to talk to the wrong alien."
Posted by John Arendt at 10:19 AM