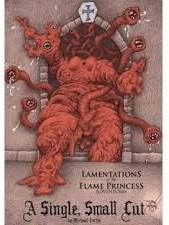 Last week's travels gave me a chance to catch up on some reading; one of the smaller items in the queue was A Single Small Cut, an 8 page adventure from LOTFP.  What kind of adventure can you pack into 8 pages?  This one includes a thievery fiasco gone awry, a prosaic locale, and an interesting monster \ artifact pair that adds some ongoing potential to your game.  For a mere 8 pages, this one punches way above its weight class.

A group of mercenaries hired by an ambitious sorcerer, Eutaric, break into a church, slaughter the mid-day worshippers, and begin looting the crypts beneath the church seeking an artifact the sorcerer has traced there.  When they find the artifact, horror ensues, and the players arrive at the church just in time to get swept up the mess.

The centerpiece of the adventure is a magic item, the Red Bell, which summons an extra-planar monster - the Corrector of Sins.  The Corrector forms a body from any nearby corpses and presents a frightening combat challenge as well as a gruesome, horror-themed opponent that crawls up out of the crypt.

I really enjoyed this one.  Horror is typically a "conservative genre", where dabbling with things best left alone or blatantly grabbing for power frequently rebounds on he who overreaches.  Many times there's an element of just desserts in horror stories.  The horror is deepened when innocent bystanders are caught in the crossfire.  In this adventure, the players represent the innocent bystanders that get caught up in a heist gone awry.  It's a classic horror situation, and this one has a potential nasty twist and second act lurking.

The ostensible plot hook is that the players are going to this church for healing, but it'd be easy to expand the role of the Red Bell in a campaign.  The author alludes to a set of similar items; perhaps there's a concerted effort to recover them, and Eutaric the sorcerer is part of a larger cabal.  Establishing a prelude where the players track Eutaric and his gang to the church, or a postlude where the players pick up the quest to recover the remaining Bells, would work well for an ongoing campaign involving monster hunters, and such an order is even hinted at - the Order of the Kite.  There is a lot of potential for enhancing a campaign present here.

A Single Small Cut was written by Michael Curtis, a seasoned vet in our OSR space - he's written things like Stonehell, The Dungeon Alphabet, and a number of adventures for Dungeon Crawl Classics.  I'll be frank, I loved Stonehell, so I was a fan already.  A Single Small Cut is a $2 PDF at the usual suspects, and at that price there's no reason not to check it out if your tastes bend towards gruesome monsters, weird objects, and a bit of the horror.  I should mention - it's set for characters in the 3rd or 4th level range.

As for the title… it's a clever allusion to the player's chance of reading the situation before the chaos starts.  Well titled indeed.
Posted by John Arendt at 8:30 AM