You Had Me At "Bounded Accuracy" 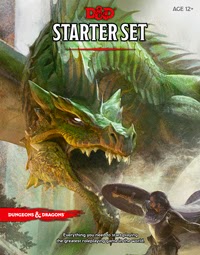 I'm starting to get interested in this new D&D Starter set that Wizards is putting out in July.  The adventure included sounds like a blend of wilderness hex crawl and mini-dungeons; the latest column from the Mearls reveals it has 4 dungeons and 5 adventure locales, enough material for a party to advance from levels 1 through 5.  On the interwebs, folks have mentioned it's inspired by B10 Night's Dark Terror (although I don't have a WOTC direct source to quote).

The new edition appears to swing the pendulum back towards supporting the types of adventures and campaigns I want to run.  The biggest philosophy shift is the idea of "bounded accuracy".  Monster armor class doesn't scale with level, and player character accuracy stays within a narrower band as well.  You no longer have the 4E problem of a marauding troll with an armor class over 30, literally impossible for the levies of peasant archers to damage using the rules as written  4E didn't lend itself to fantasy simulation.

A commitment to bounded accuracy implies the new edition will support world builders, and that makes me happy.  World building is the best part!  So what combat attributes are going to scale with level?  Damage is going up, and hit points are going up.  That means the levy of peasants is going to be able to protect their village against the marauding troll through numbers - but if the troll lays a hand on one of them, it's going to tear them apart.  Flipping it around, you can picture battles where a high level fighter cuts through a large swath of lower level mooks because the fighter's attacks are powerful and damaging, but the mooks are still tagging the fighter and wearing away resources.  It feels like a better implementation of the "minion" concept from 4E.

It'll be interesting to see how damage scaling applies to inanimate objects and structural hit points - is chopping through a wooden door with an axe any different for a beefy peasant compared to a skilled fighter?  From the little I've read, it sounds like those types of activities would be handled as skill checks, and bounded accuracy applies - leveling the field between the strong peasant and the fighter.

I also really like that they're releasing Basic D&D as a free PDF.  Kudos, WOTC.  Between the starter set and the free Basic game, we'll have plenty of opportunity to evaluate new D&D before the hardcovers start shipping.  I'm even fine with a delay in learning about an OGL or other 3rd party creator license - the books aren't going to be out until the fall anyway.

Where are you at with the upcoming new edition - interested, indifferent, or actively hostile?
Posted by John Arendt at 1:00 PM