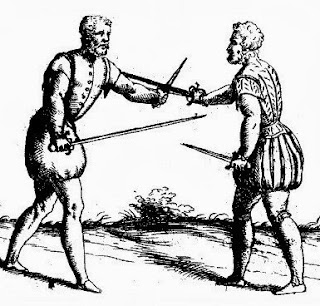 Suggested resources would include the aforementioned Backswords & Bucklers, the Vornheim city kit, various Call of Cthulhu supplements, LOTFP game rules, and Ken Hite's "The School of Night" (a setting sketch for Trail of Cthulhu). (Edit:  there was also a 2E era book, A Mighty Fortress, that featured rules for Europe in the 17th century that I'll consult as well,  )In the meantime, I'll see how things brew and ferment in the notebook and whether I see enough campaign potential there.
Posted by John Arendt at 11:26 AM