Arise from the dead, sleeping blog; we have things to do.   I have a couple of weeks break over the holidays, and I'm starting a new game.  I've finally taken the weighty, hardbound version of Dwimmermount off the shelf and plumbed it's storied depths to run at the table. 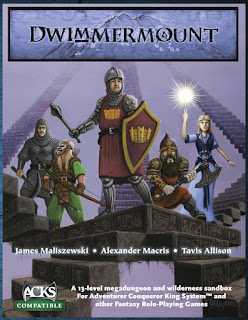 I consciously avoided Dwimmermount after its kickstarter; the affair descended into a messy drama, and when I got the book after an interminable period, I had mixed feelings about the process.  Quite a bit of time has since passed then, and curiosity got the better of me.  Now, after having read the book cover to cover, and kicking off an actual-play adventure there, I state that Dwimmermount is amazing.  Over the course of the next few blog posts, I'll take a deeper look at Dwimmermount and why it's one of the pivotal books in the OSR movement.

But I do need to step back and revisit some points about the publication's history to put my trepidations into context.  There's a deep irony in the publication of Dwimmermount. The source campaign was heavily featured on the blog Grognardia, which catalogued James Maliszewski's exploration of early Dungeons & Dragons and the roots of the RPG hobby.  His blog was a good read, and immensely popular.  James used Dwimmermount to explore the modes of play espoused by Gary Gygax and embodied in Gary's legendary mega dungeon, Castle Greyhawk.

Castle Greyhawk has never seen print.  It was a living, breathing dungeon created over many years and innumerable game sessions, a collection of scant notes, worn maps, and hazy recollections of the author.  As fans, we hounded Gary for decades to commit Castle Greyhawk to a publication.  There have been heroic fan versions, but for various reasons, Gary took the original with him to his grave.

After some years of running his popular Dwimmermount game (and reporting it on his blog), James launched one of the most successful OSR kickstarter campaigns I can recall, to fund a print version of Dwimmermount.  The gentlemen over at Autarch, publishers of Adventurer, Conqueror, King (ACKS), had recently entered OSR publishing with their successful launch of ACKS, and they partnered with James to deliver it.

In a bizarre twist of history repeating itself, the project soon got into trouble.  The effort of turning scant notes, worn maps, and the author's hazy memories, into a fully realized, printed megadungeon, turned out to be just as daunting for James as it had for Gary Gygax.  James withdrew from the project, and Autarch, which had other considerations in play, such as their reputation as a new publisher, and a bevy of planned products, carried on with the commitment to the backers.  The final publication of Dimmermount is a blend of James' original campaign and the embellishments added by Autarch to build out the raw notes, remediate gaps, and reconcile inconsistencies.

The final product is a triumph.  But how do we assign credit and authorship?  I'm perplexed by the ambiguities related to the creative process and the finished work.  Is a creation diminished if the author fails to complete the piece and a second author, or even a third, comes along to see it through?  I'm sure many projects are collective efforts and we are none the wiser for having been spared the details on "how the sausage was made"; in the gaming space, this project stands out because of the public way we came to know the visionary creator withdrew, the sordid response by a minority of fans, and how the remaining team stalwartly carried on.  The mixed pedigree of the product has forced me to reflect on the permutations of collaborative art.  Actually, working the discussion out as I was writing this brought me to an epiphany: is it perhaps silly to get caught up on authorship concerns and pedigree on the eve of "Star Wars Day"?  I'm taking the family to see the new movie tomorrow.  It's not like we even considered looking askance at the work of Disney or JJ Abrams because George Lucas is out of the picture; in fact I'm thankful there will be no Jar Jar Binks.  (Don't let me down, JJ Abrams - I better not see Gungans).

This preamble to Dwimmermount is waxing long.  I'm very fond of the book, and as you check back over the next few weeks, I'll be sharing my reasons for praising it highly.  We'll look at the world of Dwimmermount, its role as Axis Mundi, how it embodies various old school ideals, and then take a look at the dungeons themselves.

To close this bit of blog necromancy, I'll offer a brief account on where I've been:  I started a demanding master's program this past year, a 16 month grind calculated to launch me on that next career arc.  Juggling family, 3 kids, a challenging corporate gig, and a master's program at an Ivy league school has put a serious crimp on creative output and gaming.  I've been keeping up with some blogs, I ran some 5E over the summer, but I've mainly shifted into a consumer of gaming content rather than developing stuff whole cloth for my home games.  That won't change for another year, but I do expect to write about gaming and keep up with the news in OSR-land.  Glad to see so many of you are soldiering on while this place has been dark.
Posted by John Arendt at 9:26 AM