Introducing a new regular column - Black City Friday.  One way to ensure I do consistent work on developing the Black City is to make a column about it - I've been pretty good about keeping up with Mythic Monday, my weekly foray into myth and folklore, so this seems like a good plan.  Through sheer accretion of material, the dungeon will get built.  My other weekly goals are to do a game report and a review each week.

The idea behind the Black City is to make a weird horror megadungeon influenced by the works of Lovecraft, REH, and Clark AShton Smith.  It's an ancient ruined city, once inhabited by alien beings that experimented on terrestrial life, introduced arcane science to the world, and enslaved early humans.  It's located on the frozen island of Thule, part of an arctic archipelago.  The city itself is perpetually obscured by mist.

Below is a map of the city (work in progress - I expect to tweak the color palette to make it more arctic).  For a while I struggled with different versions of it on graph paper, and ultimately decided it was best to represent it as an abstract, sprawling, ruined hex crawl.  The surface ruins will be a mix of set locations and random hex contents (an idea I picked up from the excellent Lesserton & Mor).  I like the idea of "show don't tell" Zak is championing over by DNDWPS and this seems like a good philosophy to follow as I build out the Black City.

Here are some teasers on the surface locations:

If you want to get caught up on the (verbose) background of the city (the tell not show approach) here are some early posts: 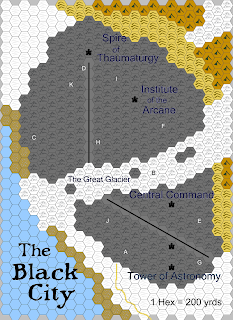