Review: The Spire of Iron and Crystal 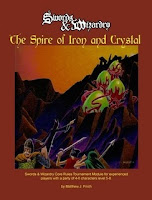 The Spire of Iron and Crystal was another item on the wish list that I got during GM's week; instead of RPG Now, you can get this one over on Lulu for $4.95.  It's a 36 page adventure module that covers a 4 level dungeon.  It's written by Matt Finch, and the stats are flavored Swords & Wizardry (but it's seamless to convert to BX or 1E D&D).  It's for a party of levels 5-8.

The cover does a good job of portraying what is the dungeon - a cluster of giant crystalline eggs perched in twisted, ornate metal girders - at the bottom of each egg is a maze of rooms and laboratories.  The structure has stood on a cliff side ledge for centuries without ingress.  At the beginning of the module, the players have discovered how to enter.  (This was originally  a tournament module; in a campaign, I'd suggest seeding the location in the sandbox early and let the secret of entry to the tower get discovered organically).

Let me just say up front, I found this to be one of the strongest adventures that's been published by the OSR.  A few of my favorites (that haven't been reviewed here yet) include Stonehell, Castle of the Mad Archmage, and Death Frost Doom; The Spire of Iron and Crystal is right up there in terms of creativity and scope and is a must-have.

The dungeons of the Spire mix fantasy with themes of science fiction in a way you see in works like the Tales from the Dying Earth.  It's a bit less of a mash-up than the old Expedition to the Barrier Peaks and should work in a wider variety of campaigns - no fear of introducing cybernetic powered armor or blaster rifles to your D&D game and throwing off game balance forever or messing with your campaign tone.  (From that perspective, this is Barrier Peaks done right…)  All of the science elements are magical in nature, and this should work in just about any fantasy campaign - at it's heart, it's just a really really unusual wizard's tower and laboratory.

Here are the elements I loved about this one.  The spire is not easy to enter, or to move from level to level, presenting puzzles that will challenge and delight your players.  The dungeon levels expand the adventure vertically in a way I haven't seen done before in a published work - and there are locations the players won't even be able to reach unless they learn to take advantage of the new space.

Just about every monster in the module is custom and fits the theme of fantasy with a touch of weird science.  It's guaranteed the players will be off-balance in the unfamiliar setting, dealing with unusual new monsters.  There are plenty of puzzles, traps, things to tinker with, and strange elements of "dungeon dressing" that reinforce the atmosphere (in addition to the challenges of getting in, out, up and down).

The issues are minor.  Treasure might be a bit light for a party to gain a level of experience (I'm going to open this as a separate blog topic during the week - curious what people think).  I appreciate interesting site-based adventures that allow the DM to seed it into their campaign as they see fit, without having to drop any story elements or plot to make it work; this adventure is right in that mold.

It's a clear 5 out of 5 on the Beedometer for creativity, challenge, and fun, exploring a side of fantasy literature that hasn't gotten a lot of attention.  I need to find a way to get this into the current campaign, or the next one.  My players are going to love it.
Posted by John Arendt at 11:42 AM