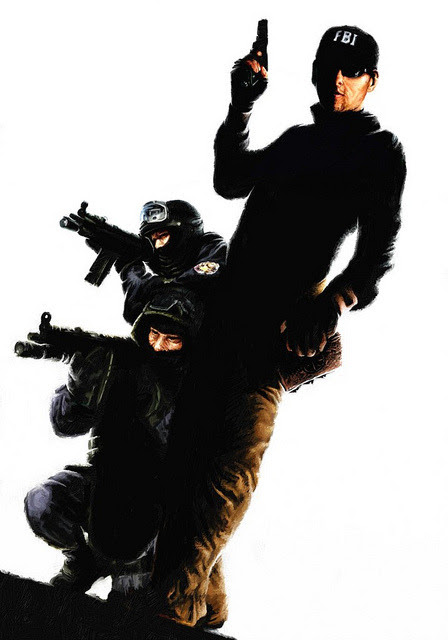 "Be careful what you wish for…  "  The Cold War is over, and the investigative power of government agencies has never been greater than in the post-911 and post Patriot Act period.  These new powers will only be used for good, right?  That seems to be the theme of the new version of Delta Green in development.  (Delta Green is a popular modern setting for Call of Cthulhu, kind of like The X Files meets the Mythos).  Delta Green's enemies from the 1990's are gone, government agencies like the FBI have more power than ever, and things are worse.

I missed the Delta Green panel at Gencon, but it was recorded and posted over at The Unspeakable Oath.  In the original Delta Green, most of the "weaponization of the Mythos" was being done by monolithic agencies with roots in the Cold War and World War 2.  They're all gone now, and the myriad occult experiments and research projects that were once centralized are now loose in the wilds.  Dennis Detwiller posted an art piece from the upcoming book, and the FBI has traded in their signature suit and ties for tactical gear.  I don't think we have to worry that the new game will be "Rainbow Six and the Mythos", however.  Bullets still won't hurt Yog Sothoth.

I'm not going to get *too* excited just yet, the product has no publishing date other than "sometime in 2013", but I'll be tracking it closely.  Kenneth Hite was on the panel; it sounds like he's joining Delta Green regulars Dennis Detwiller, Adam Scott Glancy, Shane Ivey and Greg Stolze on the new book.

Speaking of Ken, I've been listening to a new podcast on the morning commute:  Ken and Robin talk about stuff.  It's a general roleplaying and writing podcast hosted by Kenneth Hite and Robin D Laws, but it also dips into history and Ken's deep research on matters occult and mystical.  If you like their stuff, I recommend giving it a listen.
Posted by John Arendt at 6:34 AM