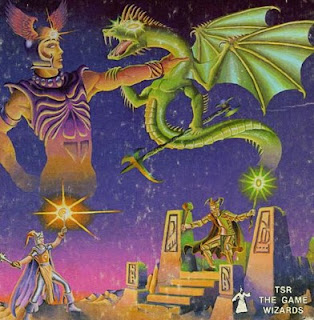 Mythic Monday - using elements of folklore, myth and legendry in your game

I always loved this cover of the old Deities and Demigods book, with the two clerics battling it out.  As the priests fire off magic from the rods they hold aloft, they fight as proxies for the divine struggle going on in the heavens above them.

Evil clerics are common antagonists and villains in the D&D universe - TSR's catalog of modules featured evil priests in Hommlet, The Temple of Elemental Evil, the drow priestesses in Against the Giants, the evil cleric in Keep on the Borderlands, and so on.  Here's the thing though - as I searched thought and memory for great moments in the mythic sources for similar fights, there's really only one place where we see priests of opposing gods squaring off and battling it out as proxies.  The Bible.  The Old Testament, specifically, is full of priestly throw-downs.

The Bible is a holy book for like 2 billion people, a third of the planet.  But it's also a foundational literary source for western culture, and certainly part of America's cultural DNA… and it's clear EGG used it heavily for inspiration when creating many of the spells for the cleric class.  It's not my intent to be disrespectful by discussing ancient Bible stories as mythology.

Getting back to the priest fighting - one of the most vivid priest battles is Elijah versus the priests of Baal  - 1 Kings 18.  Elijah shows up and challenges 400+ priests of Baal to a mystic throw down.  The two sides build huge wooden pyres with sacrifices on them, and the test is to see who'll be able to call down the power of their god and light up the sacrifice, a slaughtered bull.

The Baal guys spend all morning dancing around, shouting, performing some ritual blood letting, all to no avail.  Then Elijah starts in on the trash talking… “Shout louder!” he says. “Surely Baal is a god! Perhaps he is deep in thought, or busy, or traveling. Maybe he is sleeping and must be awakened.” (1 Kings 18:27)

Well, you know how the story goes - the priests of Baal can't do anything, Elijah's god creates a huge flame from the sky that fires up his woodpile, even after it had been drenched with water.  Amazed by the display of power, everyone present switches sides back to Yahweh, and they march the Baal priests down to the river and, you know, kill them.

There are some other priestly confrontations in the OT as well; more throw downs with the Baal priests, throw downs with Dagon.  Who can forget the old "Charlton Heston as Moses" movie, where Moses gets into that spell slinging battle with the magicians of Pharoah, casting their staves into snakes and then having the snakes eat each other?  The whole 10 plagues sequence in Exodus is full of priest vs magician one-upsmanship.

As monotheism took hold of the Mediterranean world (and Europe), the idea of the militant priest that converts people through a divine show of force recurs again and again in story and legend.

I'm reminded of the story of St Boniface, the 8th century missionary to the Saxons who felled the mighty oak tree of Thor (the Donar Oak) with a huge gust of wind.  (He might have swung an axe, too).   I ran a dark ages Europe campaign a few years back, and spent a lot of time familiarizing myself with Carolingian lore.  When Boniface felled the oak, and wasn't struck dead by Donner's lightning, the locals decided to flip sides and become Christians.

Dueling Clerics in D&D
It got me thinking how to inject some conflict into the life of your campaign's clerics and use them as divine ambassadors and champions.  Start with the premise that the gods in your world actually want to be worshiped; they're jealous of their follower's devotion, and they want to increase their reach.  The clergy should be actively promoting the god's interests and challenging the capabilities of the opposing gods.  Enter, the priestly duel.

Put an element of the Wild West into your game - but instead of a couple of gunslingers out in the dusty street, you have a pair of clerics entering into the Thunderdome… two clerics enter, one walks out.  "This town ain't big enough for two gods, partner.  Now draw!"

Hold Person is a staple spell for low level clerics; Rings of Free Action would be premium items for dueling clerics.  Light, Command, Silence 15'; there are plenty of low level spells to support the dueling cleric.

Adventuring clerics in your game are probably the most well traveled ambassadors and champions for their temple and religion and could act as these wandering spell slingers for the faith.  Their very presence should be creating conflict as they travel into lands dedicated to foreign gods.  Either the incumbent priests want them out, or the god of the adventuring cleric wants to expand his or her reach.  So throw some complications your cleric's way and get them involved in some good old fashioned priest fights!

The interesting thing about dueling clerics, is that experience points matter.  The more experienced priest will be able to cast more powerful spells in the duel; most temples would want their champions to travel around and accumulate enough experience and magic items to defend the faith.


Post Script:
I am keenly interested if readers are familiar with other mystic showdowns between priests or clerics in myth, legend, fiction, or pulp fantasy - just because I like to track this kind of stuff down.  The examples I listed come primarily from the Judeo-Christian tradition.  The Homeric epics feature martial champions of the gods fighting as proxies, but not priests of the gods fighting on the god's behalf; for instance, the priest Laocoon in the Iliad is struck down by Athena directly, and not an opposing priest.

I've mentioned before, my Appendix N reading so far has put me in touch with plenty of clerics vs elves and faeries; beyond that, the cleric seems under represented in pulp fantasy.  Let me know what's out there!
Posted by John Arendt at 7:56 AM