ACKS and Oriental Adventures: The Samurai 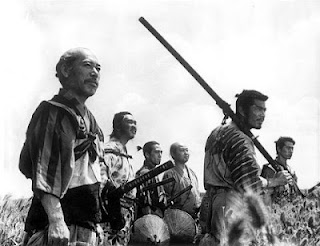 My future campaign setting, Spirit Island, is heavily themed on feudal Japan.  I'll post bits and pieces here on the blog and file them under 'Spirit Island' and 'Oriental Adventures'.  While I work out maps and provinces in the background, I'm starting by posting a rundown of classes and character options here on the blog.

The most fateful decision I've made is to build the game using ACKS as the rule set - Adventurer Conqueror King. The career arc that's strongly supported in ACKS - dungeon and wilderness exploration transition to campaign roles and domain management - perfectly fits my goals for the campaign.  The proficiency system in ACKS provides sufficient customization to the core classes to model archetypes from feudal Japan using core classes.  I am strongly biased towards using existing classes where possible, since it encourages compatibility across editions.  Where there's not a good fit, like new race-classes for an Asian setting, then I'll build them using the ACKS player's companion.

First off, let's look at one of the core classes in the setting, the Samurai template for the fighter class.  We previously discussed here on the blog that the fighter covers everything from Roman legionnaires, Mongol horse archers, European knights, to the Samurai.  ACKS does the fighter justice, equipping the class with extra damage, built-in cleave, and proficiencies to customize the fighting style.  Between extra damage and cleave, a mid to high level samurai will be able to wade through lesser opponents in the finest Chanbara film style.

Perhaps the biggest reason to make the Samurai a fighter is the inherent social mobility in the historical period I'd like to emulate.  During the Warring States period, there are many examples of common-born warriors distinguishing themselves on the battlefield, getting promoted into the ranks of the samurai, and eventually founding their own clans and daimyōs.  Samurai shouldn't be a "class" that you have to start at level 1; if you’re not born into a noble family, you can still get a promotion to samurai status through service to a lord and feats of arms.

That's the essence of excellent old school gaming - where character is something you become through play and survival and advancement, and not fully formed at the beginning of the game.

The Samurai - A Fighter Template for ACKS
The samurai are the military elite of feudal Japan.  The role is defined through service to a lord as a vassal.  A samurai is oath bound to follow a moral code called bushidō, which requires loyalty to lord and family, martial prowess, maintenance of honor, and willingness to die in service.  A samurai is expected to be an expert rider, archer, spearman, swordsman, and versed with various meditative arts, such as gardening, calligraphy, ink-painting, poetry, and the tea ceremony.

What's missing?
Perusing the standard ACKS proficiency list, there are not many gaps.  One of the famous elements in the samurai media and literature is the quick draw capability, the techniques of iaijutsu.  An encounter moves from parley or verbal confrontation into a duel at blinding speed, with katana whirring from their sheaths and striking down opponents all in one fluid motion.

Iaijutsu:  The character excels at quickly drawing his or her weapon and making an immediate attack.  The character gains a +4 bonus on initiative rolls during the first round of combat, before weapons are drawn.

The huge importance placed on etiquette and artistry seem affectations of a later time period, when court politics rose in prominence, but Zen has a long history throughout the period.  I'm on the fence whether an etiquette proficiency should be added (even if a player believes calligraphy, tea ceremony, poetry, and so on is important for his samurai character); most likely, I would just treat arts proficiency as covering the samurai arts, and diplomacy covers etiquette.

The primary samurai unarmed technique was jujutsu, comprising a series of chokes, armbars, throws and holds, the forerunner of modern judo and Brazilian jiu-jitsu.  ACKS has a proficiency that boosts unarmed striking.

Jujitsu:  The character is skilled at chokes, armbars, wrestling throws and holds.  When the character attempts to wrestle in combat, the normal penalty of -4 on the attack roll is reduced to -2, and the opponent receives a -2 penalty on the saving throw to resist the maneuver.  (Note:  I realize this is exactly the same as the 'combat trickery' proficiency, which actually does cover wrestling - I like the updated name for flavor).

Over on the Autarch forum, Alex (the author of ACKS) had posted a system for reputation that he uses in his home game; it would work well here and I'll see if it can be cross-posted.

Intimidation raises a good question - what about the 'psychic duel' from Oriental Adventures?  This was the idea that two swordsmen would have a battle of wills before a fight, with the loser admitting defeat before a sword was even drawn.

I can imagine a few different (and simple) approaches working for psychic duels; perhaps it's generated as a reaction roll modified by charisma, Intimidation skill, and reputation (since the reputation modifier is a factor of experience level and deeds).  The character that gets the highest psychic duel roll in the stand-off gets a bonus on attack rolls if the fight actually happens.  The loser has an opportunity to bow out before initiative is rolled.

Alternatively, Psychic Duel could be a new proficiency that allows a character with the proficiency to force a morale check before combat even starts with a successful throw.  Like the Intimidation proficiency itself, it would be limited to working on lower level flunkies only.