Upcoming in the Black City: The Warrens of Decay 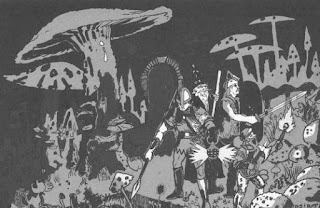 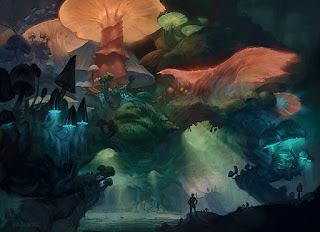 It's been a long time since I posted anything on the Black City, other than game reports.  I'm usually running my home group through it as our weekly game, giving me a chance to test things out and make necessary changes.   But I haven't been musing much about the upcoming stuff.  Let's talk about the massive second dungeon level below the city, the Warrens of Decay.

Spoiler warning:  if you're a player in my home game, you should skip this one  - it'll be much more fun discovering this first hand.  But I won't leak anything too important on the blog.

Below the Transit Tunnels is a massive cavern complex filled with an underground mushroom forest, drawn out on hex paper to cover miles of terrain, similar to the Vault of the Drow.  Back when the city was functional, automatons and workers inserted organic matter (ie, dead animals) into the growth matrix to support a rich biosphere of alien mushrooms for feeding the overlords of the city.  One of the classic sci fi tropes of the city is that the AI's and other systems are still running in the absence of their interplanetary makers.  The fungus still grows, and corpses are still inserted into the matrix to provide nutrients for the biosphere.

The warrens are crawling with oversized insects - all those giant spiders, beetles, centipedes, ants, and other creepy crawlies that litter the pages of our favorite D&D bestiaries.  Rage worm contamination has forced many normal species to grow to gigantic proportions, while amplifying the creature's aggressiveness.  There's even a deep chasm separating two halves of the warrens, inspired by that gruesome chasm with all the giant bugs and worms from the King Kong remake.

There are a handful of intelligent factions that have claimed different sections of the underworld - a kingdom of Neanderthals, serving their blue skinned goddess; the horrible bat-worshipping Morlocks, who curry favor with deeper denizens through their blood sacrifices; the automatons themselves, who maintain a degree of order, led by the hordes of 'glass spiders' that scurry across the cavern ceilings looking for organic matter to insert into the matrix.

I loved the old 30's sci fi movie with "She Who Must Be Obeyed", and so the Neanderthals are led by an immortal priestess-queen who is yearning for some new company, ie, the player characters.  SWMBO found the ancient Neanderthals across the sunless sea in their homeland, and it's possible for players to piece together their ancient exodus by studying the Neanderthal mythology, and thus learning about that lost homeland.  The origins of the Morlocks, Neanderthals, and the White Apes of the upper ruins, are all entwined with an ancient eugenics program that happened in the breeding caverns beyond the sunless sea.

Much like a modern theme park, there are secret areas in the caverns from which scurry the glass spiders and other automatons that maintain the systems, and these entrances provide access to some of the smaller dungeons, as well as the deeper dungeon levels below the warrens.  If you've followed the game reports closely, you may recall there was a Latin inscription found by the players that implied a lost colony of Roman sailors, stranded on Thule centuries ago, abandoned the frozen surface world to carve out a new life in the underground forest.  There are clues to the fate of those lost colonists to be found, as well.

The Warrens are structured for characters level 3-4, and the guys are still level 1, so the home group is still some time away from being able to survive the caverns.  But it's fun to provide some teasers about the upcoming areas.

Underground "mushroom forests" have been an inspirational part of D&D and similar games since the beginning; the top picture is from B1 In Search of the Unknown; the middle one is from 4E's book on The Underdark, and features the troglodyte mushroom city; the last is just a screen shot from Journey to the Center of the Earth.