The Aristotelian Traps of Game Creation 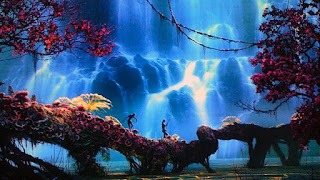 I've been mulling the nature of the Spirit World as part of the development for the future "Spirit Island" campaign.  It's a setting I hope to use next year by repurposing some OSR rules to cover ground similar to AD&D's Oriental Adventures.

Ideas are whirling around my brain - inspirations culled from anime like Moribito: Guardian of the Spirit, Avatar: The Last Airbender, and Spirited Away; concepts drawn from J-horror properties like Silent Hill, Ringu, Ju-On, or Dark Water; it's even territory that has been trod by roleplaying games, like Werewolf: The Apocalypse.

It's hard to break out of the western, Aristotelian, impulse to explain how everything fits together.  As a game master and world-builder, you're expected to have answers, statistics, and mechanics, to reduce the great mysteries to a mere set of numbers for game purposes.  A glance at the appendix in the Player's Handbook, the original Deities and Demigods, or Manual of the Planes, with those baroque drawings of the relationships of the planes, reveals an orderly pantry where everything is set neatly on its own shelf.  A careful model with turf set aside for every conceivable alignment or relationship to elemental matter is depicted in the classic view of the multiverse.  Were I a learned occultist, I could probably trace the inspirations for that model of the planes, perhaps to the Theosophists or the Medieval hermeticists.  That Gygax fellow was well read and had a mind for harmonization and syncretism.

Much of what makes movies like Spirited Away or the various incarnations of Japanese horror so compelling is the ambiguity, the not knowing precisely how things hang together.  It represents a loss of control - a realization that our narrow slice of being exists in a much larger universe where we don't understand the rules.  In The Ring, for instance, we almost start to get a sense on what motivates Sadako (or Samara, in the Americanized version), but just as we get close to comprehension, the rules apparently change.  It's quite different than most American horror movies, where there's usually some kind of silver bullet, some rational explanation that provides a solution, if the protagonists can only persist long enough to see it through.

So the challenge in developing an alternate cosmology for use in the Asian setting is this problem of creating a set of rules that govern how things work, but placing the comprehension of the rules beyond the purview of any of the characters (and maybe even the mundane inhabitants of the setting).

But certainly, some things are known about the functioning of the spirit world?

As the name implies, it is the source of spirits, both light and dark.  Powerful spirits of light might have been worshipped as gods in the past, and humans have sought to please them, whereas the powerful dark spirits can only be appeased.  It is said the spirit world is a reflection of the waking world, and prominent landmarks have their own analog on the other side, altered to exaggerate characteristics that resonate the emotion of the place.  Depending on how and where one crosses over, the spirit world can be bright and sunny, and is referred to as the Summerlands, or it is dark and forsaken, when one crosses into the Nightlands (the realms of Samārando and Yorutochi, respectively, although they could be one and the same).

There are rare places where the veil between the worlds is thinner, and mortal magic can create a bridge to walk physically into the spirit world - others can only project their consciousness, leaving their mortal form behind.  It's also easier to enter the spirit world during the times of the solstice, when the walls are thinner, or when using certain drugs, or eating special plants.  These are all closely guarded secrets.  Of course, at these hallowed locations or celestial phases, the spirits can more easily enter the mortal plane, too.

Water and mirrors act as conduits, and there are rumored to be deep pools lost in the wild through which a swimmer can surface on the other side.  Ponds, lakes and certain springs are all associated with spirit creatures, the most  dangerous of which are the dragons.  Other spirits range from small scuttling things, to powerful incarnates representing early gods.  Stories also persist of people encountering spirits of their own family ancestors.  But many spirits are abstract concepts, personifying such varied elements as mountains, trees, and landmarks, to emotional properties like spirits of madness, fear, and rage.  Have we created them through our dreams, or is it the other way around?


*The picture is a still from the movie Avatar, depicting the wilds of Pandora.
Posted by John Arendt at 6:49 AM