Magic and the Spirit World


Spirit Island is an Asian themed setting for old school D&D I'm working on, based on folklore and traditions of feudal Japan. 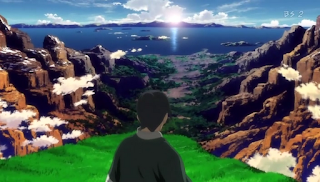 Shamans describe the spirit world as consisting of a number of interconnected realms - the Summerlands and Nightlands,  Natsunokuni and Yorutochi; the Celestial Court, where the greatest of the kami dwell; the Pure Land, a place of great beauty and enlightenment; Yomi, realm of the dead; the Hells, the place where devils and Oni originate.  These distinct places are considered smaller realms within the larger spirit world, because it's understood by the wise that spirits, and the rare mortal visitor to the spirit world, can cross from one realm to another while on a spirit walk.

The Nature of Spirits
There are a near infinite variety of spirits, ranging from simple spirits personifying a particularly distinct tree or landmark, to the majestic spirits that rule the Celestial Court, like the Sun and her brother, the Moon.  Spirits range in appearance from horrible aberrations, such as giant clawed centipedes with human faces or the terrible 8' tall Oni, with their green skin and glaring red eye, to the glorious divine presences of the gods, who sometimes appear as men or women of great beauty.

Spirits do share some basic characteristics.  In the spirit world, they are physical and tangible, but in the mortal world, they are invisible and immaterial.  Many spirits have the ability to become visible, and some are powerful enough to manifest physically  in the mortal world.  Most spirits that can assume a physical form can only do so near an anchor in the physical world, such as a landmark or gate to the spirit world.  Immaterial spirits can only be affected by magic or their spirit bans.

Spirits are usually affected by one or more bans that limit and control their interactions with the world.  Many spirits can only manifest at night; some can't cross running water; most can't travel far from their physical anchor.  There's no limit to how strange or weird are the possible bans; a spirit might be forced to appear when its true name is said a certain number of times in a row; some can't cross the threshold of house; a river spirit may never be able to walk backwards; a spirit may be forbidden from speaking certain words; another spirit is obliged to eat anyone appearing before it and not carrying a juniper sprig, while the next can't attack anyone holding a turnip.

Learning a spirit's ban is a difficult but important step to safely interacting with the greater spirits.  It's common for spirits to become fascinated with mortals, and folklore is full of spirits that have physically manifested and become the lovers and spouses of humans.  In most cases, the human is placed under a ban that will dissolve the union and send the spirit back to the spirit world if the ban is broken; common bans for these marriages include things such as never revealing the true nature of the spirit spouse, or remaining faithful.  The offspring of these marriages are the spirit folk.

Magic and Spirits
Detect Invisible is invaluable for dealing with spirits, as it reveals the presence of lurking spirits, and also reveals spirit gates - doorways to the spirit world.  (True Seeing also works).  In the mortal world, spirits are otherworldly creatures and can't affect someone with Protection from Evil.  They can't cross an Anti Magic Shell.  Dispel Evil can destroy a spirit or sever its connection to an anchor.  Gate can be used to open a direct path to one of the spirit realms.

Alignment
Spirits are creatures of order.  Their actions and goals are governed by rules that are nonsensical or inscrutable to humans, but are binding to the spirits.  The greatest of the kami shaped the spirit realms and brought order to the primordial chaos.  Spirits are Lawful, and spell casters that draw on divine power are similarly Lawful.

Law is a cosmic alignment and an indicator of divine power; it does not reference good versus evil.  The majority of humans are plain old Neutral.  A human gains the Lawful alignment by drawing on spirit power, such as the various clerical spell casting classes, or otherwise gains a supernatural allegiance to a powerful kami.

Chaos is the echoes of the primordial void, the roiling elements before the creation of the mortal world and the spirit realms.  Monsters seek to subvert the natural order, destroy civilization, and return the world to the primordial chaos; they have the Chaotic alignment.  Magic Users and elementalists gain the Chaotic alignment by drawing on these powers of the void for their spells.

Note:  Although spirits have the Lawful alignment, many of their actions are evil when viewed through the lens of human morality.  Furthermore, most spirits have dual natures and aspects, one benign and helpful to humans, the other destructive and terrible from a human perspective.  Priests and shamans are often invoked to appease wrathful spirits and help them transition back to their benign nature, calming the angry spirit.

What's Next
I need to go back to working through character classes and class options; I did a bit on samurai as fighters a few weeks ago, and will continue with korobokuru, hengeyokai, spirit folk, and the other options for humans.  I'm using ACKS and the ACKS players guide, so it opens up some neat class options like the shaman, witch, and warlock.

I'll be starting to post spirit creatures here and there as I build out a bestiary.  I've tried to keep the cosmology loose and ambiguous, so interactions with spirits remain a bit vague, mysterious, and unsettling.  One thing I need to work into the mix is the nature of the undead, Japanese ghosts, and spirits of vengeance, and how they differ from ancestor spirits or the enlightened souls that reside in the Pure Lands.


*The image is Nayug, the spirit realm from Moribito: Guardian of the Sacred Spirit.