Free RPG Day was partially successful.  None of the "game stores" in the area participated, so I had to drive out to the King of Prussia area in PA to find the nearest place.  Despite calling ahead the day before, it was still a mess when I got there.  The guy I spoke to on Friday told me to swing by when they opened at 10am, the clerk at 10am Saturday said they weren't giving away the free RPG stuff until noon, and it would be through random drawings, and I needed to hang out all day to have a chance at getting something.  (I'm not kidding - that's how they were managing it).  After a quick call to the manager, the clerk came to see things my way, and I was able to grab the primary book I was after (the LOTFP "Better Than Any Man").  There were some other things to get at the shop, and I went home mostly happy.  I'm used to stores in year's past letting you pick more than one title, so I missed out on the S&W and DCC items this year.

"Better Than Any Man" looks fantastic - it's 96 pages, well produced, and covers a ton of adventuring locales and plot hooks.  I've only had the chance to leaf through it, but if appears to treat game balance and your campaign setting with the same callous disregard we've come to expect and love from the LOTFP line.  I'll get a review up this week. 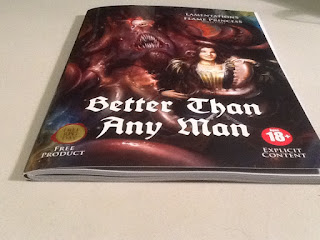 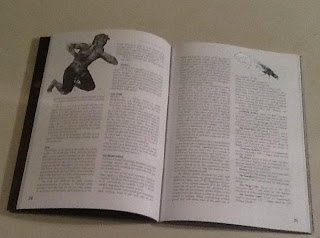 MASKS OF NYARLATHOTEP COMPANION !!
Out of the blue, Yog-Sothoth.com has put up their massive reference book for Masks of Nyarlathotep.  Happy Father's Day indeed!  This thing has been worked on as a community project for over 5 years, and for a long time, it looked like it was going to be commercial (like maybe a Chaosium "monograph").  One reason I've held off running Masks so long was the possibility of seeing this thing get finished.  It combines the efforts and experiences of many Mask's keepers on getting the most out of the campaign.  Now I'm glad my players recently chose to do a few Delta Green one shots, it means when we circle back and take on Masks at a later time, I'll have the companion to look at.

(I'm going to recommend anyone grabbing to drop some Innsmouth Gold in the Yog Sothoth tip jar - as a 550 page PDF monster, I'm sure downloads of the Companion are going to rock their bandwidth costs).

I'll just point out to the OSR folks - yes, it's true, sometimes these labors-of-love community projects make it through to the end.  Hang in there, Petty Gods. 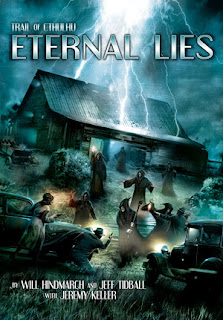 ETERNAL LIES
Pelgrane Press recently had a pre-order for their massive Eternal Lies campaign for Trail of Cthulhu.  This one has been in playtest and writing for a few years, and the snippets you hear from the playtest reports are absolutely glowing.  It's pretty clear the writers set out to create a sweeping campaign that pays homage to MASKS while breaking new ground, and the overarching structure is reminiscent (in a good way).  So far, I've been reading the pre-release PDF on the tablet, and I'm super impressed with the campaign so far.  It releases later this summer  - maybe in time for Gencon, if I'm lucky.  I'll put together a better preview once I've gotten through the whole thing.

(Understandably, Eternal Lies one is not free, but I've been meaning to mention it on the blog).
Posted by John Arendt at 12:50 PM