Review: Better Than Any Man 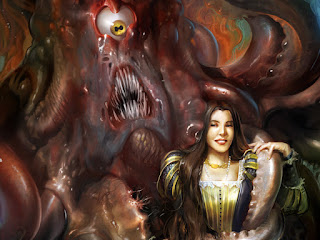 I spent a chunk of time reading through Better Than Any Man this week.  At 96 pages, with miniscule print, that was no mean task.  This booklet is chock full of adventure.  The lucky folks that picked it up at Free RPG Day got far more than their money's worth.  Over the course of the 96 pages, this supplement describes a good sized sandbox (30 miles across), a central urban settlement, and six discrete dungeons.  I'm not going to call it an adventure; this is really the LOTFP setting for which folks have been clamoring since the early days.

So why do a review of a free product with limited distribution?

It's a chance to highlight a fine game product and call out what makes it work.  I can only hope more publishers follow suit and put out good things that I like.  For you deprived souls that missed this one earlier in the month, it's my understanding that a PDF version is in the works for release over the summer.  Help is on the way.

The atmosphere behind the setting is spectacular.  It uses the "real world" Thirty Years War to establish a rich background with minimal fuss and launch the reader right into the action.  A powerful invading army of Swedes is approaching the region, forcing evacuations and pushing a wave of refugees in front of it.  The Swedes are going to crush the city of Karlstadt, where a cabal of sorcerous women, "the Seven", have recently seized power.  The threat of the invading army lends the sandbox an apocalyptic quality.  The players have the opportunity to wander and loot a war-torn sandbox in 17th century Europe.  The main line of play assumes the players engage in quests either for or against the Seven in and around Karlstadt, on behalf of the Protestant Swedes or the Catholic Germans.  Many approaches are open.  Along the way, there are opportunities to learn about the various dungeons in the area and find some bad guys to stab.

The LOTFP signature elements are present and accounted for.  The adventure has a strong horror vibe.  Some of the locales are crawling with giant insects, with all the bad things that you imagine over-sized insects would do to people.  Magic is dangerous and unstabling, leading to insane NPCs and overpowered spells with uncomfortable side effects.  The evil forces are either the ancient, cruel, undying variety, or ordinary folks doing bad things to other folks, and giving adventurers a good reason to stab them in the face.  There are mature themes and some tough elements that challenge modern players to respond - religious persecution and historical witch trials.

Let's take a moment and address the "controversy" around the mature themes.  There are some gruesome pictures depicting people and insects and the insects doing bad things to the people.  There's a full page picture of some people doing bad things to other people as part of their menu planning.  I just have to wonder - when the orcs and the goblins in Keep on the Borderlands are kidnapping merchants and their wives, are some of these people thinking they get taken back to the monster lairs to play patty cakes and get treated to some tea and scones?  The author here is making explicit what's been implied all along in these games that feature monsters and people and the monsters doing bad things to the people.  Let's just say no to the orcish patty cake games, okay?

But I wouldn't hand this over to a kid, either.  Two movies might feature people getting shot by other people; one ends up with a PG rating because it doesn't show the blood and the brains and the splatters, and the other gets an R rating because it shows us all the stuff that the first movie glossed over.  This book earns its R rating.

I recommend this one a lot.  Using a quasi historical setting really shines here.  Mind-numbing gobs of mundane exposition gets completely skipped because you can assume the referee already knows a bit about portraying European culture and a historical region.  The price is right for getting handed an entire campaign - just keep your eyes open for that free PDF to end your deprivation.

One last thing.  If you haven't read the adventure through all the way, the author is playing a bit of a game with the title of the book and that "alluring" cover.  There aren't actually any poor tentacle monsters being maltreated by their lady summoners.  The author is taking advantage of a long tradition of sensational covers used to sell books (or in this case, to push the buttons of uptight game store owners).
Posted by John Arendt at 9:20 PM