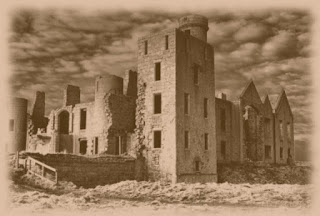 Two weeks stretch before me, with unprecedented creative writing time.  My family was able to make the annual pilgrimage to the grandparent's lake house for a two week vacation, while I'm stuck here over the upcoming holidays due to work commitments and a large project going live this weekend.  Without kids and a wife to dote on, what to do with all my time?  More writing.

Two projects jump to the forefront - compiling the Black City notes into a manuscript, and laying the foundation for a future game, Harrow Home Manor.

The Black City is the megadungeon we've been running for the past year and a half (at least up until the recent excursion into Call of Cthulhu).  The elevator pitch is like this:  what if Vikings found Lovecraft's City of the Elder Things somewhere beyond the North Sea?  It's fairly gonzo.  It has ancient aliens, creatures of Norse myth, and extraterrestrial computers masquerading as Asgardians.  These next two weeks are a good time to get my notes into a cohesive manuscript and decide how to move forward to make it shareable/publishable.

The other one is Harrow Home Manor.  The manor is a crumbling ruin on the Yorkshire moors, in an alternate (gothic) version of England, Dread Albion.  The star-fallen cyst of a sleeping god was carried onto the moors and enshrined there by ancient people; the site has been inhabited by Picts, Celts, Romans, Britons, Norse, Normans, and even the Templars.  Structures sink into the earth, pulled down by the cyst's awful gravity.  A journey beneath Harrow Home is a trip back through time, where the deeper one delves, the earlier are the ruins and styles of the architecture.  When players eventually find the cyst of the sleeping god, it's a cracked, egg-like structure the size of a truck, an oozing miasma.  Cave paintings in the lower levels show how it was the size of a grapefruit when it was first carried to the site, getting progressively larger over time.  What's going to come out when the egg hatches?

Whereas the Black City is gonzo and high adventure, I want Harrow Home to borrow more ideas from Call of Cthulhu and have a strong horror theme.

Before I develop too much tunnel vision on drawing and stocking dungeons, I'd like to sketch the sandbox first.  (See what I did there -- tunnel vision, drawing dungeons?  And they say I'm not funny.)  Here is the first take on the hex map for the moors and surrounding areas.  Time to make sketch notes on the locales and remove any of the modern settlements - or find their 16th and 17th century names. 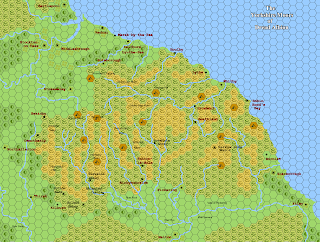