While I was taking an unanticipated break from table top gaming, one of the players wanted to a Cthulhu session, so I had a rare chance to play.  He thought No Man's Land, a Chaosium tournament adventure, looked pretty good for a one shot, so he spent some time getting it ready to run, and that's what we played the past few weeks.  I'll go ahead and do a brief play report on how we did, and then a capsule review of the adventure.

OUR GAME
No Man's Land came with a full set of pregenerated characters for the referee (with backstories) so we started play immediately.  It's near the end of World War I, and the players are part of a Lost Battalion, isolated and cut off in the Argonnes Forest, and still engaging enemy soldiers.  The overall course of the adventure had us leaving the defensive positions to scout for some missing companies in the battalion, then getting knocked off course and lost due to foul weather and the chaos of war.  Along the way, we stumbled into various encounter sites (a German outpost, a medieval village, and a camp of cultists).  The main motif seemed to be this:  an ancient evil that feeds on strife and horror, lurking beneath the forest, has reawakened due to the horrors of the war, and an ancient conspiracy of cultists (tracing a lineage back through Medieval times) prepared to open a gate to return the horrors fully to the world.

Smitty, the guest ref, did an amazing job with creating props for his rookie turn behind the screen.  During a scene in a desolate village, we fled to a lonely church where the priest thrust an old book at us (with all the answers) right before the monsters nuked the church.  He also gave us a magic crystal that detected the presence of the otherwise invisible and ethereal monsters.

Here are a few pics of the props: 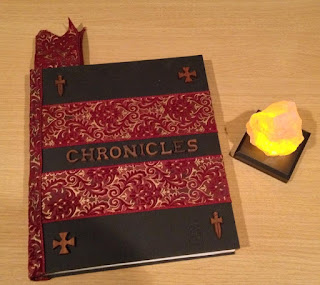 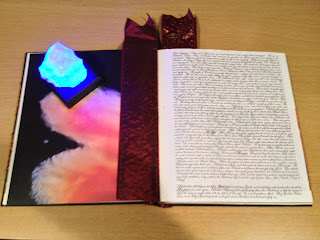 (He put a cool cover on an old text book, created those fancy bookmarks, and pasted full page excerpts of the key texts into the text book, so we could flip from page to page and read passages saved by monks and priests that battled the horrors in past ages.  Very cool!)

The big climax occurred after we escaped an encampment of the cultists and made it back to battalion.  An army of zombies attacked the defensive positions, and the cultists used the distraction to sneek into the underground caves (where the ancient temple stood) and attempt to open the gate.  It was nothing a few grenades couldn't handle.  But overall, No Man's Land was super deadly; the adventure started with 6 player characters, but only 3 of them survived.

REVIEW OF THE ADVENTURE

No Man's Land was an interesting experience, but not a very good adventure.  Years of running free-form D&D adventures and sandbox games have poisoned me from enjoying an adventure with such obvious rails.  As a tournament adventure, No Man's Land has an omnipresent clock that kept us literally running from scene to scene - the equivalent of "when the action slows down, men with guns kick in the door and start shooting".  The stress of constantly being harried kept the table alert and created the experience that no place was safe.  Unfortunately, it felt like no matter which way we decided to go (or how we navigated), we ended up forced to the next proscribed scene.

We (bloggers) tend to think of "railroad" in two ways - as a series of linear scenes, or as a foregone conclusion where the decisions of the players just don't matter to the outcome.  I'm much more forgiving of the former than the latter.  Both definitions of railroad were very much in evidence in this scenario.  Like I mentioned above, if you're trying to recreate the horrors of war, the meaninglessness of choice, and the absurdity of it all, pushing the players along a linear path and thrusting bad things on them with no chance of avoidance (incoming!) is a fine of way of creating that experience.  It doesn't make for a great game, although it was quite memorable, and we're still talking about it!

The setting of the adventure and themes are super interesting - it involves megalithic sites, witch cults, the slumbering lloigor, dragon-myths, and the great old one Ghatanothoa.  Plus zombies and ghouls.  One can argue that qualifies as a mythos zoo and banalizes the monsters, but I felt the varied and overwhelming Mythos elements just reinforced the apocalyptic ideas behind the scenario.  All hell is breaking loose because of the war and the reawakening lloigor, and World War I zombies and charnel ghouls are just part of the scenery.

So how do I rate this one as a written scenario?  I really don't like railroads.  Creating a high pressure gauntlet was interesting and made for a memorable experience.  I have to think there are other scenarios that have done a gauntlet while either hiding the tracks better, or preserving the sense of player choice.
Posted by John Arendt at 5:16 PM