Catching Up with the Taenarum Campaign 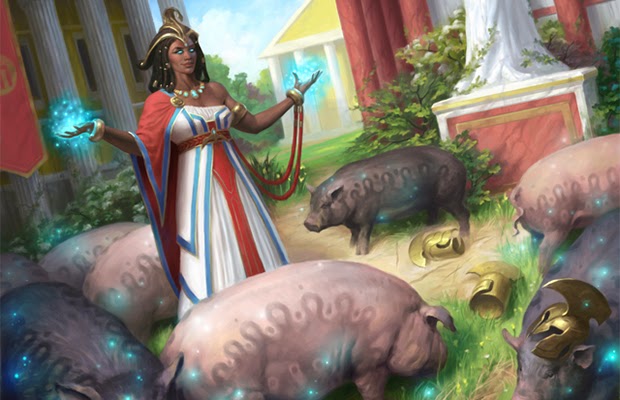 It makes sense every few months to put a summary or preface before one of these game reports, to help orient new people or provide a refresher.  What is this Taenarum of which I speak?  Taenarum is a sprawling dungeon built around the legendary road to the Underworld.  It sits at the farthest end of Mythic Greece, below Sparta in ancient Laconia.  The nearest village is a small coastal cove named Psammathous Bay.  In the years since the legendary heroes returned from the Trojan War, lesser heroes now make their way to haunted Taenarum to wrest gold and glory from the minions of Hades, god of the Underworld.  The spirit behind the campaign is merging the quintessential D&D experience with Greek myth and legend.

I'm running Taenarum using ACKS (Adventurer Conqueror King), a BX retroclone that adds a lot of additional classes to the core 4.  ACKS characters are a little stronger than traditional BX characters, lending to the heroic atmosphere.  Although my first gaming love is horror, the tone of Taenarum is whimsical and fanciful to support gaming with the family and some younger kids.  Currently two groups are exploring Taenarum; some of my adult regulars and their older kids in one game, and the younger kids and family in another.

Last game, the adults group - Moe's Marauders - were forced to attend a banquet with a capricious sorceress, Atalante.  Each level of the dungeon is separated into quadrants connected by the road to the Underworld, and Atalante's palace is in quadrant 4, near where the road to Hades slopes downwards towards dungeon level 2.   Over dinner she would decide whether to let them live,  turn them all into swine, or transform them into pig-men to join her company of pig-men soldiers.  In a previous game, the players accepted a mission to rescue a prisoner from Atalante, a merchant's son named Jude.  They tracked a pair of pig-men back to the sorceress's palace and requested an audience with her.  They learned that Jude wasn't a prisoner at all - he was a willing apprentice of the sorceress and didn't want to return home.

That's as good a place as any to start this week's game report.

Atalante's servants presented the characters a banquet of fresh fish and Mediterranean vegetables, all cooked to perfection, while nearby in the hall her lines of pig men slurped out of troughs and buckets.  "You've presented me with a dilemma", the sorceress addressed them over dinner.  "I appreciate your honesty about your goals, and you're clearly resourceful.  But I have a reputation to maintain.  My operation here can't run unopposed unless bandits, miscreants, and adventurers are deathly afraid of getting turned into boars or pig-men at my whim.  You see why I shouldn't let you go.  Take the incident that happened just a few days ago, where some looters broke into a section of my palace and looted a store room.  There must be repercussions."

The players quickly picked up that the door was open for negotiation, and hammered out a deal with the sorceress - they would deal with any other adventurers on level 1 that had taken up the rescue mission, and would find the looters that broke into her store room and deal with them.  (The irony is that the players were the ones that looted the palace, unknowingly).  They would tell the merchant back in town that Jude was a pig-man and beyond rescue.  Since pig-men were fine as guards but weren't great at exploration, they even agreed to enter her service as occasional explorers and mercenaries for hire to carry out occasional explorations.  This was one of those nights where half the session was table talk, roleplaying, and learning a bit about the dungeon.  Atalante had a number of targets to explore in quadrant 3 of level 1, quests for future game sessions.

In the meantime, the focused on another adventurer group that needed to be eliminated - some rivals from back in town called "The Repo Men".  The party scoured the area of the dungeon where they thought the Repo Men might be camping out, found them, ambushed them, took them out with a Sleep spell, and then killed the lot of them.  It was brutal!  Players are funny.  They could have attacked the sorceress and done away with her threats, they could have kidnapped Jude after knocking him on the head, they had options.  They chose to eliminate the competition - and then blamed the robbery of Atalante's palace on the dead Repo Men.  Murder hobos!

There were some other entertaining moments.  I've placed a lot of treasure maps in Taenarum, and the players already have a couple of fragments from way early in the campaign.  Adam, one of the players, was absently shuffling through his notes at the beginning of the session and suddenly called out, "I know where this treasure map goes!"  The players had covered the area a couple of game sessions ago, and only tonight realized there was a hidden treasure in a previous room that wasn't searched thoroughly.  They circled back for some easy loot.

In another empty room, there was a small, dim pit.  The dwarf hung over the side with a torch (for no apparent reason) but it was fortuitous - the light illuminated a camouflaged section of wall hidden in the shadows of the pit.  The thief discovered that a gray cloth was draped over a piece of statuary sticking out of the wall - a carved satyr's head, mouth agape like a fountain.  There were dried green stains on the ground and a coin-sized slot in the satyr's head.  Someone had scrawled a nearby note in charcoal, hard to read - "This one takes about 500…"

The thief dropped a coin in the head, and it made an arcade-like plink plink plink sound as it disappeared within.  They dropped another.  They pooled their money, everyone pitching in 50-75gp, and laboriously slotted 500gp into the head, like it was a giant piggy bank, eager to see what happened.  The floor started to vibrate, machinery clanged, and the satyr's mouth started spewing green liquid.  The thief expected it, and had a waterskin ready to catch as much liquid as possible.  It turned out to be the equivalent of two healing potions!

"This is too valuable to let other adventurers know about it, let's cover it back up."

Overall this was a good session.  Lots of enthusiastic table talk and planning, they now have a patron in the dungeon, and one of Atalante's future missions included finding the source of the giant insects in quadrant 3.  "There is some force or magic power there that causes normal bugs and critters to swell to gigantic sizes… my mistress is interested in studying this source", Atalante said, hinting at a greater power that sponsors her presence in the dungeon from elsewhere.  She's patterned herself after Circe, after all.


*The picture is Curse of the Swine, a Magic card in last year's Theros block.  It's pretty awesome that last year's Magic sets featured lots of Greek myth inspiration - I've been loving it.