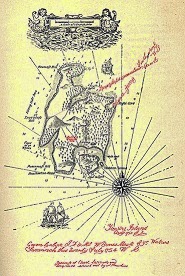 I've been enjoying using treasure maps in Taenarum.  They come up as random results on the magic items table, and I've placed them manually to add interest to a treasure hoard and relocate treasure to someplace more appropriate.  They serve a useful, self-referential purpose in the dungeon.  They give the players a reason to circle back and discover something previously missed, or offer them a useful clue they need to hold onto until it makes sense - when they can match the map snippet with the treasure  against their larger map.

I'm firmly in the camp that a megadungeon needs lots of empty rooms and fly-over terrain.  The players aren't meant to laboriously explore every corner of every room; they're frequently passing quickly through empty spaces en route to an actual destination or quest.  It creates space for them to find a reason to return to an 'empty' area later when they find a map or clue indicating a hidden cache.

I've placed a few verbal treasure maps as well, little rhymes such as "Black water beneath the cypress tree, third step down to find the orange key".  So far, none of these have shown up in game reports, though at least one is hidden on somewhere on level one.

Eventually, the treasure maps I use will be more elaborate - they'll point to areas outside the dungeon that require quests and wilderness travel.  For lower levels, the self-referential maps are fine.  I don't want to over think them, and don't let them become blockers.  They're completely optional for the players - bonuses for the vigilant.
Posted by John Arendt at 8:41 PM