Overminds of the Black City

Build your own Brain-in-a-Jar or Alien Super Computer! 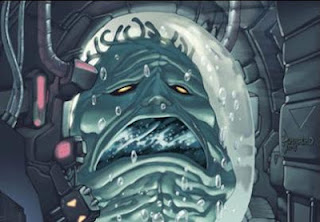 I was working on the Black City manuscript and finishing up the Tower of Astronomy section from the other day (the entrance hall is here:  Tower of Astronomy, first floor), and when I completed the upper area of the tower, came across one of the city's myriad "overminds".

The overminds are alien computers, artificial intelligences, installed in key facilities throughout the city to oversee delicate processes that required  both creative decision making and docility.  Overminds control the deep earth manufacturing, regulate the Warrens of Decay, supervise the science lab, and one even controls the geostationary observatory that relays star patterns back to the holographic displays in the Tower of Astronomy.

Millenia of idleness and boredom have driven all of these alien intelligences completely insane, and they've used the intervening epochs to circumvent their original missions and generate their own agendas.  The overmind of the fabricators on level 3 creates plastoid Roman Praetorians patterned after the captured soldiers of the Lost Legion, who landed on the island centuries ago; the overmind of the science lab in the deep sections sends up specimen gathering automatons, seeking examples of surface life for experimentation and vivisection; the overmind of the astronomy tower has spent millennia  gazing into the cold depths of space and looking down on the city, and now sees itself as one of earth's gods.

All overminds communicated with their alien masters via telepathy, and can adjust their telepathic frequency to communicate with terrestrial life, such as the Northmen.  Overminds manifest a holographic avatar near their main terminal.  Their intelligence is housed in a fragile crystal matrix, but this is protected behind sheets of metal, often deep in the stone and impossible to attack without high level magic.   The minds are vulnerable to mental magical attacks, and save as level 10 magic users with +4 to the saving throw vs mental effects.  They often exert physical control over their local environment, locking doors and activating defenses; these abilities are noted in the room text.

Here are additional attributes to generate your own overminds.  These would be fine for Brains-in-a-Jar creatures, too.

*I like the simple psionics in Realms of Crawling Chaos, but the DM could easily substitute standard magical powers for any of these abilities.

I made a sample alien super computer when finishing the Tower of Astronomy location, I'll get that guy up in a day or so.