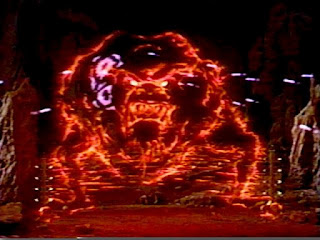 One of the locations I recently put together for the Black City is haunted by a psionic ghost.

The Black City is an alien ruin because the race of Greys was slaughtered in a psychic cataclysm before the ice retreated.  Their most powerful controllers, the hive minds, were advanced telepaths, linking the entire colony telepathically.  When tragedy struck, the torment of the hive minds left behind psychic ghosts, malevolent shadows of pain and hatred that linger even now.

Thus, there's a class of psionic monsters in the Black City that can be encountered in locations where a hive mind died during the cataclysm.  While the more powerful versions will be like the Monster of the ID (drawing inspiration from that classic, Forbidden Planet) the one inhabiting the ruined "central command" is more like a vicious poltergeist.  Another one to add to the Black City Bestiary.

The calcified corpse of the hive mind still sits in the large amplifier chair that once allowed it to broadcast commands throughout the city.  A dull mauve alert has been flashing for a millennium or more, casting the large room into intermittent darkness.  The psionic ghost fettered to that crystal corpse attacks with telekinetic pushes, or seizing weapons to smack characters with their own armaments.  The push attack isn't damaging, but anyone that climbs the tall shaft from dungeon level 1 into central command from below is in for a rude surprise.

*The AC and HD stats are for the corpse fetter.  The actual psionic entity is immaterial.  Destroying the fetter by reducing it's hit points to zero releases the psychic residue and destroys the ghost.

Unlimited by the physical constraints of a body, the psionic ghost can make 2-4 attacks per round.

Invisible:  the psionic ghost is invisible, but any seized weapons will dance around in front of the character it's attacking.  Detect Invisible reveals the psionic ghost, which appears like a malevolent leering alien with oversized head, and the tendril fetters tying it to the crystalline corpse like a silver cord are plainly seen.  Detect Evil also reveals the ghost's presence and the fetter.

Telekinetic Push:  A character saves vs paralysis or is knocked down by the telekinetic push.  This can be used to knock characters back down the shaft, or keep them from charging the crystal corpse.

Weapon Grab:  treat each weapon as AC Chain for purpose of the grab attack; a character can make an open doors check to retain a weapon already in hand, but a sheathed weapon is yanked away for use by the ghost.

Weapon Attack:  Any seized weapons can be used on future rounds to make a 5HD attack.