A Review of The Armitage Files 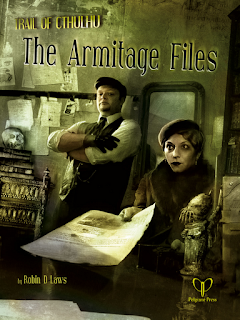 As I embark on a series of Pelgrane Press reviews over the next few months, The Armitage Files is a good place to start.  It illustrates Pelgrane's reputation as a risk-taking publisher willing to break new ground.  I had never encountered a game book like this one.

Consider this premise:
A pair of bizarre, disturbing letters arrive, in Professor Armitage's handwriting, describing an apocalyptic future in which he failed to avert a monstrous tragedy.  The unbalanced writer behind the letters claims they're being sent back through time, in the hopes that investigators receiving them in the past will be able to stop the coming horror the writer himself couldn't prevent.

BAM!  There it is - the type of elevator pitch that could launch a whole TV series - or at least keep a role playing campaign going for a long time.  Handwriting analysis and other tests seemingly prove the authenticity of the letters, and the player characters are approached as trustworthy outsiders that can investigate the disparate facts and clues revealed in the letters and solve the mystery.  The clock is ticking, and more documents materialize from the future as the situation worsens.

In case you didn't know:  Professor Henry Armitage is the protagonist of Lovecraft's tale "The Dunwich Horror".  In the years after dispelling the Son of Yog Sothoth, Armitage has formed a discrete group of professors to investigate the Mythos.

Here's a sample of what one of the letters looks like - this one is later in the timeline, when the author's coherence is diminishing: 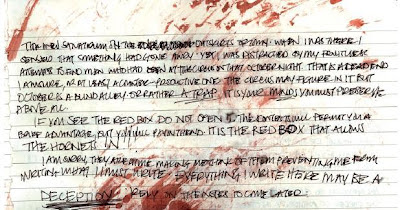 And the readable version:

The new sanatorium on the outskirts of town. When I was there, I sensed that something had gone awry. Yet I was distracted by my fruitless attempt to find men who had been at the circus that October night. That is a dead end, I am sure, or at the very least a counter-productive one. The circus may figure into it, but October is a blind alley. Or rather a trap. It is your minds you must preserve above all.


IF YOU SEE THE RED BOX, DO NOT OPEN IT. The contents will permit you a brief advantage, but you will pay in the end. IT IS THE RED BOX THAT ALLOWS THE HORNETS IN.


I am sorry. They are at me, making me think of them, preventing me from writing what I must write. EVERYTHING I WRITE HERE MAY BE A DECEPTION. RELY ON THE NOTES TO COME

The handouts are spectacular.  Each full letter is a sheaf of pages, revealing a handful of plot hooks and clues.  I've used the term "target rich horror gaming" to describe my goal of building a sandbox that gives the players many options, and every letter of this campaign supplement provides numerous clues, plot hooks, people, and locations to investigate.  It's the ultimate horror gaming sandbox.

But there's a massive caveat; The Armitage Files is presented as a giant toolkit for running an improvised horror campaign.  It includes write ups for many people, organizations, places, tomes, and magic items, and each one comes with an option for being used as an ally, enemy, or innocuous bystander - but the actual structuring of the campaign is very much left up to the referee and the vicissitudes of player choice and inspiration.

There is a lot of advice on running an improvised game, guidelines on how to structure an improvised narrative, and tips for encouraging the players to take the reigns in the sandbox.  There's a section on the pacing of a traditional horror investigation, how to improvise scenes that lend themselves to the structure.  There are also plenty of 'actual play' transcripts in the book.  If you ever wondered about running an investigative scenario sans script, this is the book for you.  But my own anecdotal observations lead me to believe that many referees adopt a hybrid approach to the campaign, letting the players guide the sandbox action and improvising along the way, using the time between sessions to embellish some the potential upcoming challenges in the traditional "prepared beforehand" style.

The physical book itself is excellent.  It's a 152 page soft cover, with glossy heavy weight magazine pages, and that beautiful dark sepia art by Jérôme Huguenin that's come to characterize the vintage look of the Trail of Cthulhu line.  There are 10 letters from the future in The Armitage Files, and you can download nice looking color versions of the pages from the Pelgrane site (you need a copy of the book to unlock the file).  Long time Call of Cthulhu players are familiar with the ubiquitous hand outs and clippings that accompany most scenarios, and this product takes the handout concept and turns the dial up to 11 with these spectacular props.

The book is written by Robin D Laws, Gumshoe designer and a long time Pelgrane author.  Robin has a list of credits around game mastering advice that encourages players to co-create the game world, so an improvisation heavy campaign is a logical extension. The Wise Google tells me this The Armitage Files book won an Ennie award.

So, how would I rate or recommend this book?  Let's step back and think of the many famous campaigns or illustrious adventures that are published for my favorite games; we've played Ravenloft, but haven't made it to the Vault of the Drow; I've run Shadows of Yog Sothoth and Beyond the Mountains of Madness, but just haven't gotten around to running Masks of Nyarlathotep.  That kind of stuff.  I put The Armitage Files in similar standing, a paradigm-changing campaign that redefines what's possible on the table.  It's gone on my "Must Try" list, too.  The gamer bucket list.  I'll see where our upcoming Trail campaign goes; even though I've done some improv theater, the thought of an improvised campaign is still daunting.  It's not an approach for the faint of heart, or slow of wit, or something to do on a night when the tank is half empty.  But I'm looking forward to the challenge. 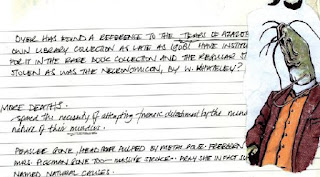