A Cleaved Head No Longer Plots 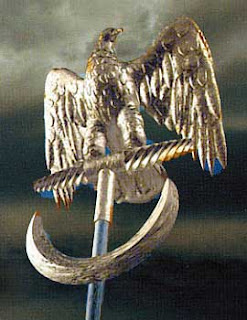 In which our stalwart looters find a hidden area within the Well of Woe, and escape with a worthy reward.

Sometimes it pays to come on that night when a lot of the regular players can't make it, and the group turns to a bunch of retainers to help fill out the ranks.  Less full-share members to split the XP!

Back at their camp, the group started by inquiring amongst the crew of the Isgerd's Fury if any of the other explorers were good with locks, or sneaking around, or climbing - the Spitsberg Pirates had an immediate opening for a thief.  Ivar the Bow-Bender stepped forward, and was hired on after a short interview.  Apparently Shamus's reputation is growing, evidenced by Ivar's enthusiasm (and high potential morale).

The usual debate happened, regarding which destination should be tonight's goal - the upper ruins, the Well of Woe, or a deeper dungeon, like the mist dungeon?  Tonight they decided to finish exploring the Well of Woe.  I'm skipping all of the other transactional stuff, going to Trade Town to sell gear, rumor mongering, and putting in motion the plan of implementing the gambling ring.  (Yeah, that's a whole other story, their scheme to bring high stakes gambling to Thule).

This was interesting; after paying the toll and heading off into an unexplored section beneath the Well of Woe, the party found this curious inscription in the wall, engraved not by stone chisels, but by some otherworldly hand that melted the lines into the very stone:


To Those Who Come After
The Statement of Publius Labienus Murena
Principales IV, Classis Nemea
Our Ship is Ruined by Ice
Unable to Depart, We Descend to the Forest
To Build a New World
Many Fallen Are Left Behind
Year CCXXXI, in the Reign of Gallus

I should point out, it was engraved in Latin, although a few of the characters could read it; Shamus read it aloud.

Curiosity was piqued!  Could this mean there's a "forest" somewhere deeper in the dungeons, or were the Romans here in an earlier age, when the weather was different?  Someone reminded the other players of the warm, fetid odors coming up from the depths, when they stood before a hole in the floor of the mist dungeon.  Perhaps there really was a stinking jungle down in the dark?  Could descendants of the Romans still be alive, somewhere in the depths?

Over the course of the succeeding chambers, a Norse shrine was discovered, god poles and evidence of blood rituals around the room.  Various camp sites, replete with runic Norse graffiti were discovered, with such memorable slogans as "Halfdanson was here", or "I killed a man… twice", perhaps a reference to the dead frequently coming back to life.  One of the scrawls the group puzzled over was this: "The giant's head is here, it drips.  The body is in the ice!"  Some of the writings were traditional wisdom, like the piece at the top - "A cleaved head no longer plots".  I guess things were simpler in Viking times.  Office politics would be much easier to manage if I carried a battle axe.

The climax of the night was when the group discovered a hidden Roman ossuary, where dozens of skeletal remains lay in repose beneath standards of the golden eagle.  "Even if they're only gold plated, those standards would be worth a lot of money", quipped the thief.  Of course, it was a bit of a trap, and the group found themselves fighting dozens of 'hungry bones' - skeletons that loped on all fours, attacking them viciously with claws and bites, doing anything to pull flesh from the bone.  Anything swallowed by a skeleton fell through the skeleton's ribs, where its neighbors fought over the scraps while waiting their turn to attack the fresh, tasty people.

This was one of those hour-and-a-half, edge-of-your-seat battles, where the group formed a four-man fighting wall in front of the hatch, preserving their escape route if the line should fail, while the clerics did what they could to heal the front line, and fresh fighters could rotate in after a bit of first aid or cure light wounds.

We’re currently using the LOTFP rules for the campaign (though I fully intend to give it a test with ACKS as well), and I have to say, the Turn Undead treatment is high risk/high reward.  If you're not familiar, Turn Undead is a 1st level spell in the LOTFP rules, making for a difficult resource choice for the players.  The transit tunnels of the undercity have been crawling with undead, making me think two Turn Undead spells is necessitated, but the players gravitate towards Cures when they pick spells.  This time they had three clerics, so they took two Cures and a Turn.

In the LOFTP version of Turn Undead, the cleric can keep rolling to turn more undead as long as they succeeded on the previous roll; Bottvild the Valkyrie Priestess got on a hot streak, and ended up driving half of the skeletons back with her Asgardian chants.  I was impressed.  Judicious rotation in and out of the front line kept everyone alive, and the group ended up destroying over 15 of the skeletons without losing anyone.  The priestess kept the remaining undead cowed at the far end of the room, as a few of the characters stole forth to grab the golden Roman legionary (aquila) standards and beat a hasty retreat.  They closed the hatch behind them and headed for home with a worthy haul of loot.  We have a couple of characters that have hit 1,400xp and have their eyes fixed on reaching level 2, assuming they can survive a couple more games.

Just for the record books - here was this week's crew of player characters and retainers:

Cast of Characters
Mustafa of Arabia, a Fighter
Shamus, a Gaelic wizard
Brutok the Dwarf
Bottvild, a Cleric