Lamentations of the Polar Bear 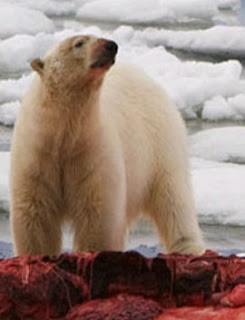 There are polar bears all over the island of Thule, for the Black City campaign, so I was adding stats for the bears to the bestiary.  While looking at how some of the games have handled them, I saw quite a bit of variation by edition.  Check it out.

BX Version:  The Moldvay edition puts the polar bear at 6HD, with claw/claw/bite attacks doing 1-6/1-6/1-10.  If both paws hit, it does a "bear hug" for an additional 2-12 automatic damage.  6 HD makes the polar a serious threat for 0-level men and low level characters; bears are the terrors of the island.


I couldn't find any evidence that real bears "hug" anyone or anything, so I wonder where the expression originated.  The most I saw was that a bear will rear up and rend repeatedly with a flurry of claws.  Going forward, I'm going to treat the "bear hug" as such a rending attack, but keep it otherwise the same mechanically.  If someone knows more about real bears doing bear hugs, I'd love to hear or see it!

AD&D didn't have a polar bear in the monster manual, but it does eventually show up in MM2.  At that point it's given HD 8+8, doing damage of 1-10/1-10/2-12 and a hug for 3-18 if one of the paws scores an 18 or better.  This version is significantly tougher than the BX version, as well as the brown bear from the first monster manual.

The king of 'over-the-top' polar bears is the version in LOTFP's Weird New World:  this guy is given 12 HD!  Damage is 1-8/1-8/1-10 with a hug of 2-16 - above BX, below AD&D, but the sheer toughness of 12 HD (and the attack roll bonuses it gets) means this guy would challenge even a high level party.  I'm not sure why James beefed the polar bear up so much; he had a weight guideline for predator HD and a 1500 lb bear is right in the 6-8 HD range.  Regardless, all those Speak with Animals type spells suddenly become a lot more important when 12 HD man-killers are walking around.  They don't see people, they just see 'Big Mac', 'Quarter Pounder', 'McNuggets' - that's the party halfling...  (McNuggets would be a great name for a halfling character, by-the-by...)

Speaking of LOTFP, I need to get a post up about the 'grand campaign'.  There are a few of the proposed adventures that are pretty dang interesting.  Seems like a good Friday post for tomorrow.

ACKS usually follows BX pretty closely, but the Polar Bear and Cave Bear are switched around in order, so I think that's just a typo or mistake.

The BX version will be fine for my assumed demographics; a 6 HD polar bear is plenty threatening to a group of 1st or 2nd level characters, easily capable of killing a character per round.   I might save a bigger HD version for a 'demon bear' or similar monster.  It does raise an interesting question, which is how do you size your 'real world' monsters against fantasy monsters and people?  That 12 HD polar bear could probably kill a white dragon.  Should a bear be able to kill a Hill Giant, assuming your campaign has such monsters? What level of hero should be able to go out alone with spear and helm and be able to best a bear in single combat?

The island of Thule is modeled after Spitsbergen island, and polar bears are a serious threat, even today.  I remember reading at one point that all new citizens have to take mandatory rifle training and always carry a rifle with them; while there are strict protocols governing when a bear can actually be shot, it seems that every year someone is killed by a bear while walking outside of the towns without a gun.

Black City Update
I've been second-guessing the decision to create a description for every hex of the ruined city.  You may recall a few weeks ago I was struggling with the use of random tables during game play, versus using them in advance to facilitate creation, and wondered if I shouldn't just generate everything in advance.  320 hexes later, and I now have something like 60 pages of brief notes.  What's done is done, and it will certainly 'play fast' at the table.

Here's a point on the importance of good NPC's:  many of the serious enemies in the ruins are other adventuring parties, and NPC party stats take up a large footprint of page space.  Once you're in the ruins, law and civilization melt away, and these armed bands of Norse explorers behave like a mix of outlaw bikers, vicious pirates, and bandits from the American west.  Trust no one, and keep your axe ready.