Pirates and Ninjas and Osprey Books 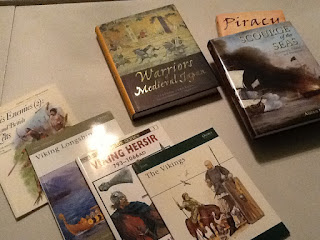 I recently discovered these Osprey Publishing books when I was looking for reference information on Viking military structures for the Black City game; after I picked up a couple of the smaller books, I learned that Osprey has collected some of them into hardcovers, so I've been looking for those on ebay here and there.  Scourge of the Seas collects their books on pirates, privateers, buccaneers, and pirate ships; Warriors of Medieval Japan collects the sub books samurai, ninja, ashigura, and warrior monks (sohei) into one volume.

Anyone else a big fan of Osprey books for historical military reference?  Which ones have you read?

One element that's worked really well in the Black City campaign so far is the idea of lots of hostile groups of men forming a big part of the threat as the players explore the alien ruins.  It's given me lots of ideas on how similar approaches could work in the context of a pirate D&D campaign, or showdowns between rival samurai groups in an Asian-themed game.  To my mind, I don't know that I've ever seen a large published dungeon for an Asian-themed D&D campaign - the wheels are turning.  The Isle of Dread would be an excellent backbone for a pirate-themed campaign; the island is part of an archipelago, and the DM could expand the campaign to cover the whole island chain.

Anyway, it continues to be a light posting week, while I cook my brain in a data warehousing class and try to catch up with my regular job in the evenings.  Let me know if you have any Osprey recommendations - I'll probably be tracking down some of the books on the Roman military, next.
Posted by John Arendt at 6:05 AM