The Caretaker of Harrow Home


“The nethermost caverns,” wrote the mad Arab, “are not for the fathoming of eyes that see; for their marvels are strange and terrific. Cursed the ground where dead thoughts live new and oddly bodied, and evil the mind that is held by no head. Wisely did Ibn Schacabao say, that happy is the tomb where no wizard hath lain, and happy the town at night whose wizards are all ashes. For it is of old rumour that the soul of the devil-bought hastes not from his charnel clay, but fats and instructs the very worm that gnaws; till out of corruption horrid life springs, and the dull scavengers of earth wax crafty to vex it and swell monstrous to plague it. Great holes secretly are digged where earth’s pores ought to suffice, and things have learnt to walk that ought to crawl.”
--H.P. Lovecraft, The Festival

One of the ubiquitous figures met throughout the dungeons of Harrow Home is the enigmatic Caretaker.  Clad in dark robes like a Medieval monk, only a bland porcelain mask stares out from beneath the hood.  No voice has ever issued forth from beneath the mask; when the figure communicates, if at all, it's through simple hand gestures, or scrawlings on the stone wall in a script unrecognizable to a 16th century explorer.

The Caretaker takes no sides in the internecine struggles between the Houses; it only visits those seeking deeper truths about Harrow Home itself, aiding their quest for knowledge.  This may even mean assisting parties of adventurers from time to time, particularly when its aid will place them in a position to learn sanity threatening knowledge and lore.  An example might be pointing out the location of a secret door, behind which lies an eldritch library that could draw the players closer to using the same kind of dark magic that defines the inhuman residents of the dungeon. 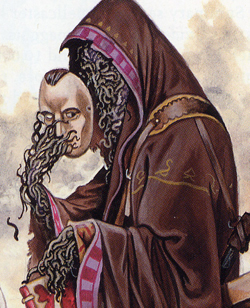 Beneath the robes, the figure is made entirely of roiling vermin; worms, beetles, and spiders, that clack and rustle with each step it takes.  The Caretaker has been attacked and dissipated before, leaving behind dead bugs and an empty robe and mask, only to reemerge at a later time from the dungeon's depths completely restored.  The sorcerers of Harrow Home don't cross the Caretaker; they remember when the Caretaker opened its robes to completely consume a victim beneath a tide of devouring insects, when an unwise sorcerer forcibly tried to extract answers from the Caretaker.

It's quite possible the Caretaker is the oldest inhabitant of the dungeon, the one figure that has learned to commune with the thing in the pit through the black dreams experienced only by the dead.  The reasoning behind this theory is simple; whenever the Caretaker's gloved claws take up chalk to scrawl a bit of writing on a dungeon wall, it's in the language of the antediluvian Hyperboreans.

The idea of "the Worm that Walks", was created by Lovecraft in the story (above), and then developed in early Call of Cthulhu adventures.  It was brought into D&D with 3E's Age of Worms campaign, although one could argue 1E's Fiend Folio first had the Sons of Kyuss as worm-dripping undead and then Kyuss was built out as an elder evil for 3E.  It carried over into 4E as the "larva mage".

I see the Caretaker as a harbinger of madness and a corrupter, a figure more like the King in Yellow wearing the pallid mask, or Nyarlathotep in the Mythos.  It guides seekers towards greater and greater knowledge and power, as long as such knowledge will bring them spiraling into depravity and madness.

Note:
I'm on vacation now, so I don't expect to have much time for blogging - see you all in a week or so.


* I believe that pic, found on the interwebs (wikipedia), is 4E's larva mage - can anyone confirm if that was 4E or maybe from the 3E Age of Worms campaign?