Dungeons & Deep Ones, Dagon & Dragons - Musings on Call of Cthulhu as a D&D Game 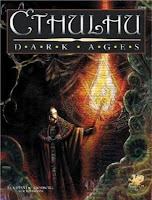 What makes Call of Cthulhu play differently than Dungeons & Dragons?  Would it be fun to run a D&D game in a Lovecraftian world?

After posting a week or so ago about turning Chaosium's Lovecraft country into a D&D sandbox, I've been giving quite a bit of thought to a future project creating a Lovecraftian sandbox for D&D.  This would be something totally different from the Black City, as it would be more horror investigation than a dungeon delving.

In a Call of Cthulhu adventure, there might be some opponents that can be overcome physically, but there are usually greater horrors that can only be thwarted, delayed, or contained.  In D&D, you can usually kill anything if you have a big enough sword.  Old school game play throws balance out the window, and player skill is required to gauge when to fight, when to run.  The investigative horror game would place more emphasis on those table skills.  "We see evil cultists performing a rite, let's get in there and stop them," versus,   "Oh no, the rite is over and here comes the Elder God, run!"

Chaosium already has published two intriguing historical supplements for CoC  that  cross over into the realms of fantasy - Cthulhu Invictus (for the Roman era) and Cthulhu Dark Ages.  In both games, characters have the chance to strap on some armor, grab a spear or sword, and head into the wilderness.  So a natural first question might be why not just run an Invictus or Dark Ages game?

Here's a quick rundown on how I see some of the differences:

Investigations versus Dungeons
If you ever look at a dungeon map abstractly, it's basically a flow chart where the doors and passages represent player choices.  A plotted investigation game with clues can be drawn up the same way - the rooms are scenes, the clues leading to the next scene are passages.  An investigative game *can* be run as a sandbox, with no need for railroading - many of the "dungeons" will be plotted as investigations.  Once the players reach an actual site-based adventure, you can run the game like a traditional dungeon.

Lethality
Call of Cthulhu is more lethal than D&D.  Experienced Call of Cthulhu characters still have the basic hit points of any human, and are just as easy to kill throughout their whole career.  On the other hand, a high level D&D fighter can take a lot of punishment.  A Lovecraft game run using D&D rules will have a pulp action feel, since the characters will be more willing to hang with a monster and try combat instead of cutting and running as quickly as their CoC brethren.  Folks used to more D&D action will enjoy leveling in lieu of "realism".  Of course, powerful Mythos entities will still crush any group.

Sanity
I'm on record as disliking the CoC sanity system because it discourages investigation, which is what the game is supposed to be about; I like the Trail of Cthulhu approach because it encourages exploration, but I feel that D&D style adventurers don't need extra motivation to expose themselves to awfulness.  I'd leave this out of the game and be happier for it.  (The previous post was 'Does a sanity mechanic belong in D&D?')

If I'm going for horror and can't create a sense of dread without requiring a roll and forcibly telling the players, "You're scared now", it's time to hang up my dice.

Skills
CoC characters have professions, which define their skills.  A fair amount of CoC mechanics are tied up with skill checks.  Old school D&D has only an abbreviated skill system.

I don't think this is much of an issue for an old school DM, as he'll be comfortable with "rulings over rolls".   Game mastering an investigative game requires the DM to understand the important clues that will drive the investigation forward and give the players the opportunity to discover the important clues, regardless of skills or rolls.

Languages and Books
A big component to Call of Cthulhu investigative play involves eldritch tomes, dead languages, and Mythos magic.  The LOTFP game has excellent language rules for a D&D style system, and Realms of Crawling Chaos brought interesting tome rules into D&D - we have this element covered.

Healing and Clerics
In Call of Cthulhu, mental health is more of a long term factor for healing than physical health, and the game uses various sanity healing mechanics.  I'd be ditching sanity, so no need for psychoanalysts.

The cleric, as a wielder of divine power, has no analog in Call of Cthulhu.  There are no higher powers on the same side of humans in the standard Lovecraftian universe.  I tackled my approach to reconciling the cleric and deities for use in a Lovecraftian universe months ago:  Fear and Trembling and Dungeons.

Classes
If you're playing old school D&D, you probably love the roles at the table implicit in classes - fighters fight, clerics protect, magic users cast spells, thieves bring special skills.  It's an instant hook for roleplaying, and part of the game's enduring charm.  In an investigative game, skill and role playing are more important.  With the old school approach to skills, classes shouldn't be an impediment during investigations, and will be familiar ground during combat.

Magic
In Call of Cthulhu, the only magic is bad magic - Mythos magic.  Every spell has a deleterious side effect.  In the standard D&D game, magic is a useful resource.

There are a few approaches I'm considering to reconcile the two approaches - one is to create a whole new class of ritual magic to cover Mythos spells, useable by anyone (or any magic user) with the right eldritch tome.  One could just adapt the Call of Cthulhu spell lists and bolt on the new magic system.

The other option is to convert the most common Lovecraftian spells into actual D&D magic user spells and make them rare and dangerous - they're not part of the commonly known spell lists.  That's the approach in Realms of Crawling Chaos, and it seems it would mesh well with the darker tone of magic in LOTFP.

Experience
D&D characters get most of their experience for treasure, so traditional campaigns often have an element of avarice to them.  Characters are more often rogues than heroes.  By the book play rewards the biggest haul of loot.  Still mulling it over, but XP might be an area to make a change - you want the group investigating the murder at the old mansion, not looting the mansion and ignoring the mystery part of it.  (Call of Cthulhu doesn't use an experience or level-based system; skills improve gradually through use).

Conclusion
I think D&D could work fine to run a Lovecraftian investigative campaign; the group will be tougher than a standard party in Call of Cthulhu, so fights against minions and mooks will go the party's way more easily, but Mythos monsters will still be scary.  The familiarity of the D&D system and class-based roles is a big draw (and the fact that there are a ton of D&D players versus Cthulhu players).  I know I wouldn't have any problems with my own player group trying a Lovecraftian sandbox with D&D mechanics, but their interest in Call of Cthulhu itself has mostly been one-shots.

Oh - and as I mentioned in the Gamer ADD post a few days ago - you'd have the benefit of being able to convert 30 years of Cthulhu campaigns.  Masks of Nyarlathotep or Shadows of Yog Sothoth would be a ton of fun as 16th century horror campaigns played out in post-Renaissance Europe with D&D mechanics.

This project goes in the queue after the Black City!
Posted by John Arendt at 8:36 AM