A look at using demonic possession in your D&D game.

…Immediately there met him out of the tombs a man with an unclean spirit… And no one could bind the man anymore, not even with a chain, for he had often been bound with shackles and chains, but he wrenched the chains apart, and he broke the shackles in pieces. No one had the strength to subdue him…  And Jesus asked him, “What is your name?” He replied, “My name is Legion, for we are many.”
-The gospel of Mark, chapter 5 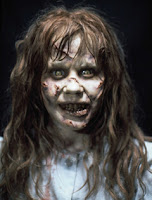 The Exorcist, The Rite, Fallen, Paranormal Activity, The Exorcism of Emily Rose, Dominion, Rec 2.  There are a lot of creepy exorcism movies out there to fire up the imagination!  Although D&D and the cleric have strong roots in the Judeo-Christian tradition, the original designers took a radically different approach to portraying demons and devils in the game - they're basically big monsters with tough AC and hit points, meant to be smacked around with swords.  Not really how demons are portrayed in real world story and folklore.  Let's fix it!

In the "real world", demons are immaterial spirits and you need some Holy Power™ on your side if you're going to stand a chance.  Here's a quick look at the demon possession phenomena and some ideas on using demonic possession in D&D.

Demonic Possession
The chapter in Mark quoted at the top lays out the prototypical demonic possession - it's worth a quick read if you're not a Biblephobe.  An "unclean spirit" inhabits a human, and the person begins to act unnaturally - they might be harmful to themselves and others, demonstrate super human strength, fly into a rage at anything holy, appear to be insane.  In horror movies, the demon possessed are often serial killers!

Some of the tests used by the Catholic church to differentiate possession from mental illness include whether the victim is demonstrating special knowledge, or fluency in languages not known by the possessed.  Special knowledge is things only the demon could know - secrets about other people in the presence of the possessed, foretelling future events, descriptions of things happening far away.

And in the best spirit of film and movie, the possessed should be able to manifest physical changes - stigmata or lesions, scars and spontaneous injuries, green vomit and walking around double jointed like a human spider!  Yeah, that's the stuff!  Horrible!

Using Unclean Spirits in the Game
Demons can't be fought traditionally - they're immaterial and immortal.  If you're using the traditional cosmology - the Nine Hells and the Abyss - then I'd keep devils as devils, Abyssal demons as demons, and use these entities as they're called in the Bible - "Unclean Spirits of the Wilderness" - fallen spirits from an outer plane that now inhabit the Prime.  But I suggest keeping the cosmology vague and have NPCs call everything 'demons'.  A peasant isn't going to differentiate between types of extra planar entities - a demon is a demon is a demon.

Demonic possession is a plot device and not a great monster encounter, although killing the victim could be part of it - the victim would have greater than human strength and be difficult to grapple.  A murderer or serial killer could be demon-possessed, or you can go with a common horror approach and involve possession of an innocent - poor Linda Blair.  A section of dungeon could be demon haunted, or a lonely ruin in the wilderness.  There are excellent sequences in Stephen King's Dark Tower series where a jawbone is demon possessed, or Roland must deal with various demon haunted locales while traveling Mid-World.   An object could be the demon's vessel - the Dresden series features a collection of silver coins each bearing the soul of a demon that possesses the owner of the coins - the 30 pieces of silver given to Judas.

The demonic attack is basically a form of Magic Jar, with the demon whispering promises and exerting mental pressure to "get in", and the failed saving throw representing a moment of weakness leading to the possession.  If possession happens to a PC, it's a good opportunity to take the player aside and let them know to start fomenting mayhem.  Demons are destructive and evil, after all.  Otherwise, the demon can choose to take control and override the host's actions at any time; the demon knows everything the host knows, but can't use any of the host's special abilities (like spells).

The basic counter to demonic possession is the 5th level cleric spell, Dispel Evil.  However,  I'd allow for the existence of an Abjuration spell (as a 4th level cleric spell) with a limited scope - basically the same effect as Dispel Evil, but only effective against demonic possession.  In fact, an AD&D 1E version of Abjure is described in S4 The Lost Caverns of Tsojcanth as part of the Demonomicon of Iggwilv, and AD&D 1E has an Exorcise spell.  Your world could also have Abjuration in a special book or holy text, unavailable through regular prayer - something like the church's Roman Ritual - the Rituale Romanum - De exorcismis et supplicationibus quibusdam.

I also like having Abjuration/Exorcise as a 4th level spell for the following reason - if you're using traditional class titles, a 7th cleric is a Bishop, and bishops in the Catholic church are given power over determining when exorcisms happen.

When an Unclean Spirit is cast out via Abjuration or Dispel Evil, it has to go somewhere.  Once again looking to mythology for inspiration, let's say the cleric performing the exorcism spell can indicate a nearby vessel for the spirit - another human, an animal(s), or a specially prepared object.  This lets us loop in the dramatic twist of the Exorcist movie (the priest takes the evil spirit into himself); the animal involvement of many Biblical stories - the swine of Mark's Legion story; and the Medieval folklore around 'trapping the Devil in a box'.  Entire monastic orders could be built around an ancient exorcism that resulted in an Unclean Spirit trapped in a physical vessel, and the order has existed ever since to keep the evil one under lock and key, sealed from the world.

The Protection from Evil and Protection from Evil 10' spells could be helpful here.  I see the potential for high drama as the group corners the demon-possessed madman who's been hacking apart villagers, and now they need to restrain him and Abjure the spirit, trapping it in a specially prepared metal flask and protecting themselves with Protection from Evil so they don't get taken over in the meantime.

Finally - there is the name of the spirit.  Most of these accounts have a dramatic moment where the priest or prophet demands that the creature reveal its name - "Pazuzu", "Azazel', or "Legion", for example.  I'd probably make this something a cleric could achieve by succeeding with a simple Command spell , and if the spirit is forced to reveal its name, it takes a -4 to the saving throw against Abjuration or Dispel Evil to reflect the power the cleric now has over it.

Abilities:
Superhuman Strength
The victim possessed by the demon will have an effective strength of 18 and increased speed and toughness.

Possession
When the demon is not in a host, it can perform an attack similar to Magic Jar once per round versus one target within a 120' range.  Unlike magic jar, the demon doesn't displace the possessor's soul; it dominates the victim and can override the victim's actions at will.

Immaterial
Demons are immaterial spirits, unable to move unless possessing a host.  When not possessing a victim, the demon is rooted to a locale or physical object.  Such an object or locale would radiate powerful evil if a Detect Evil spell is used.

Vulnerabilities
Demons can be turned; an immaterial demon can't flee, but would be suppressed for the duration of the effect.  A possessed victim will flee a cleric that turns it.  A demon takes a penalty to saving throws (-4) versus a cleric that know it's true name.  The spells Dispel Evil and Abjuration* (new level 4 spell, or use AD&D's Exorcise) are effective at freeing a victim of demonic possession.  When one of the spells is used in conjunction with the demon's true name, the caster can indicate a vessel for the demon when it is driven out of the previous host.

Closing Thoughts
The tradition of Unclean Spirits goes back to the beginnings of civilization and begins with the ancient Sumerians; demons originate in the lonely deserts of the world and are brought back to more civilized areas hitchhiking inside people.  I would recommend including a bit of archaeology into the back story of each demon as well as notes on the demon's "personality" - some might be murderers, others hedonists, others with a completely different (but evil) agenda.

The demon will have the benefit of thousands of years of experience, and demons should have a range of intelligences.  A genius level demon running rampant through a city as a serial killer could be a challenging opponent for high level characters because of its ability to jump hosts and elude capture.

The actual removal of the demon is mechanically simple (ie, using the right spells and being prepared), so the challenge in using this kind of antagonist is in identifying the work of a demon, tracing the history, finding the possessed victim, and isolating the thing for the exorcism.
Posted by John Arendt at 10:25 AM