Adventure Review: Hammers of the God 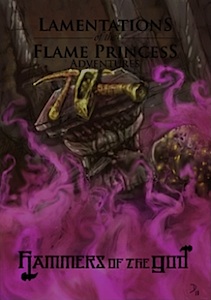 Hammers of the God is a LOTFP adventure for characters levels 3-5.  As such, it's compatible with any old school D&D game.  I ran it for my Gothic Greyhawk group a few months ago (prior to Ravenloft).  It is a site-based adventure module that describes a lost dwarven temple and tomb complex. Like most of my reviews, I expect the folks that read reviews of adventures are DM's and considering a purchase, so there could always be spoilers.

The booklet is 84 pages, detailing 27 rooms.  Some time back, I decided to rate the richness and density of adventure modules  (some posts on Treasure by Adventure Module), so continuing in that manner, here is how Hammers of the God weighs in:

The modern aesthetic is more exploration and less combat grind, so this is right in line with a density of 29% - but it's also not terribly lucrative in terms of monetary treasure.  An average 4th level group would only gain half a level based on monetary treasure.  However, the module is magic-rich and I found this offsets the low treasure haul.  Plus, there's a trove of information that could be priceless, from a campaign perspective.

The temple complex holds a dark secret hidden by the dwarves thousands of years ago, and a savvy group may be able to piece it together through murals, runes, and a fully detailed library.  There are quite a few traps and interesting mechanical elements for experimentation by a party of adventurers.  Like other works by this author, many of the traps are extremely deadly but fair; a group that pays attention, collects clues, or uses the necessary care, will survive.

I really enjoyed the detailed back story and some of the intricate features to the rooms; some of the descriptions for a single room spanned multiple pages.  This is quite a bit different than the sparse notes and bare bones sketches I might use in an improvisational setting.  The dwarven secrets in the library, assuming you use them, could destabilize dwarven kingdoms in the campaign world and lead to religious wars - heady stuff!

In actual play, the tomb complex kept the players on their guard and required consistent engagement with the physical environment - pushing levers, prodding things, smashing things with hammers, taking harrowing submarine rides down a cavernous water fall.  Overall, they had great fun.  The play reports started back with Game Report 21 if one cares to see how it went with my group.

I give this 5 stars on the Beedometer.  My first question when rating is:  How would this adventure compare to something I'd homebrew?  And then to get a top rating:  Has this been done before?  Does it break new ground, redefine a genre?  It's a totally personal scale.  In  the case of Hammers of the God, the level of detail throughout the complex, and particularly in the synopses of the 100 library books (I'm not kidding - 100 individual write-ups) makes this feel like an archaeological dig and the unfolding of a murder-mystery - or in this case, a massive cover-up.  And who in their right mind would write up descriptions for a hundred fake library books?  And yet, it works here.  My group greatly enjoyed the library and returned on multiple occasions.  The atmosphere of the temple complex is oppressive and eerie, and there are mechanics that keep a bit of time pressure on.  If your group likes detailed exploration over fight, fight, fight, this a good one for you.