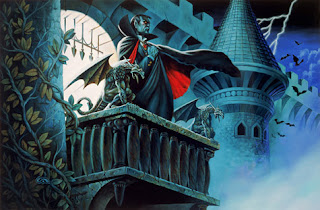 The previous game ended shortly after the group arrived at Castle Ravenloft, meeting a mannequin of the vampire lord and then battling a bunch of Strahd zombies.  We resumed.

The castle is a sprawling Gothic structure with intricate spiral staircases and towers, and it's very easy to change levels within the structure - finding the right stairs hidden in a  niche or down a side passage seems to be a main way to get around.  Down a secret hall, they took such a winding stair up and entered a dusty audience chamber.  Track marks in the dust led to a locked side door, and while the thief searched the door and started getting his tools ready to pick the lock, a pair of monsters climbed a far set of stairs.  They looked like squat armadillos with bushy antennae.

Some monsters evoke an inordinate amount of fear and terror.  I mean, rust monsters don't even do damage, and here is a group of 40 year olds squealing like frightened pigs and calling me "cheesy" for sending rust monsters after them.  (I'm sure Strahd has these pet rust monsters wandering the castle specifically to strip would-be invaders of some arms and armor).  Anyway, the rust monsters charged, and Kobra's armor was struck - his +1 plate mail was drained of magic, and was ready to rust next turn.  But one of the magic users webbed the rust monsters to the ground, and the group was able to step back and kill them easily at range.

The track marks they were following in the dust led to a room inhabited by a human - a villager chained to a desk who was laboring as the vampire's accountant.  He clutched a rope hanging through a hole in the ceiling, which he threatened would ring a gong that would bring a horde of monsters if the players threatened him.  At the same time, he wanted to help them (as long as he could maintain some deniability) since he only agreed to do the monster's accounting to avoid being eaten.  But all his chips were on Strahd.  "You're not the first group that's come to the castle looking to put a stake in the Lord".

They talked for a while, and the players got another perspective on the return of the vampire, the disappearance of so many villagers, and how the accountant came to be a servant.  He ended up drawing for the group a basic map on how to get into the crypts and find the tomb of Strahd, with the caveat that he had no idea what kind of traps or guardians could be on the way.

"No problem, it's a straight shot to the crypt", they said.  "But for now, we'll head out the castle front door, walk back down to the village, stay there in safety overnight, and come back tomorrow to finish off the vampire".

"Um, you can't leave the castle.  The red dragons will eat you first".

Yes, so the players learned that the huge stone dragons that guarded the entry chamber would animate into ferocious man-eating red dragons if they tried to leave.  Slight change of plans.  "We're going over the wall", said Mister Moore.  "Get ropes".

They left the accountant to his work, who wished them well: "Go team-vampire-slayers, go", as they left.

They did in fact rappel down the walls of the keep into the courtyard, bypassing the guardian red dragon statues.  Now they were faced with clearing the outer walls by dealing with the raised draw bridge, dropped portcullis, and a series of heavy (magical) locks on the drawbridge mechanisms.  They ended up burning a memorized knock spell (Soap) and digging for a knock spell scroll (Mister Moore) to get the draw bridge mechanisms unlocked and lowered.  Then there was the matter of the green slime, the loose boards on the draw bridge over the 1,000' drop, the howling winds beyond the walls… Strahd really didn't want people leaving.

By the time they were descending the mountain, the sky was gloomy and daylight was waning.  When they came to the castle earlier that day, it was at breakneck speed riding as passengers in Strahd's enchanted carriages.  How long would it take to walk down the switchback mountain trails?

It took too long - it was well past dark when they made it to the halfway point, a major stone bridge across a gushing mountain stream.  The gypsy camp wasn't far, but beasts were in the woods, pacing them, and the howls of wolves were everywhere.

When they made it to the gypsies, they learned there would be no sanctuary there.  "We survive because we are on neutral terms with the Lord of the Castle", pointed out one of the gypsy leaders.  "You can camp with us, share our fires and food, but should the master come from you, we won't protect you".  The camp wasn't very defensible, so they decided to walk the rest of the way back to town (another hour and a half).

A bad night became worse when a ragged female thing dropped from an overhanging tree and savaged the characters, claws, fangs and manic undead strength - one of Strahd's many vampire spawn.  "So hungry, so cold… hold me." it cried.  The thing connected with Starkweather and the group looked on in horror as he lost two life energy levels to level drain, and then they unloaded on it with magic missiles and Ghostcutter (Shy's sword against the undead).  The vampire was quickly dissipated, but they watched as it reformed as mist and flitted across the ground, back towards the safety of its lair.  They had the choice of pursuing the fleeing mist across foggy countryside in the dark, or limping to the "safety" of the village.  They went for the village.

This session ended with the group realizing that leaving the castle before each nightfall would be resource intensive - especially if the night time countryside is crawling with wolves and vampire spawn.  "It's going to wear us down".

Whew - almost caught up!  I'm still one session behind (from last week), hope to get that one done in the next day or so before we play Sunday.