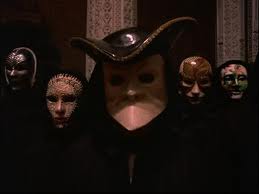 A large mercantile company in the port city is looking for some skilled adventurers to help hunt down a monster that's threatening the company's officers.  They pay extremely well.
Although this is meant for D&D, the setting feels like Renaissance or early modern to me.

The West Araby Trading Company is a wealthy consortium of merchants that have come together to form an early corporation; the chief financial officer of the company was recently murdered in his townhouse and the other officers are nervous.  Notices are posted around the city for qualified adventurers, in addition to the investigation being performed by the constabulary.
Adventurers responding to the job offer would need to prove their expertise, particularly for dealing with supernatural mischief.  If the job is awarded, various contracts are required on both sides - confidentiality agreements, non-performance clauses, and so on; the corporation is known for its deep legal expertise and skilled barristers.  However, the job offer pays extremely well and the company will pay reasonable expenses, including access to sages and NPC spell casters, if such exists in your game world.

Characters will be able to view the corpse, where it was moved to a private morgue.  The body is in an advance state of decomposition, as if it had been decaying centuries instead of a mere days.

The corporate officers are being hunted by a Night Hag (see the AD&D 1E monster manual for guidelines).  When the Hag kills a victim, it steals the soul to transform it into a larva; the soulless body immediately molders away, leading to the advanced state of decomposition.  Shortly after the investigation begins, perhaps another officer (the chief counsel) reports bad dreams and can describe the hag, giving the characters a lead.
Here's the important back story:  All of the ranking officers of the company are also members of an exclusive social club, humorously referred to as the "Friends of Mammon".  They engage in lavish parties in the countryside, masquerade balls and costumes and decadent activities like the 18th century hellfire clubs ("Do what thou whilt").  Friends of Mammon is more than the club name; the Club engages in devil worship, and much of the corporation's wealth comes from advantages gained through infernal knowledge and its extensive use of unfair contracts.

Some time ago, the corporation learned of the existence of a series of Resurrection Scrolls, potent artifacts recovered from the desert.  They know the fate that awaits them after death, and seek to cheat the devil; one of their members helped the Club test one of the Resurrection Scrolls on a member that passed on last year - the previous Chairman.  His soul was plucked from hell, and the arch-devil Mammon was furious about the breach of contract.  The Night Hag was sent to the mortal world to accelerate repayment of all debts owed by the officers of the West Araby Trading Company.

Zowie, this set up could have lots of interesting things happening.  For starters, the players will need to figure out how to stop an ethereal Night Hag from murdering the officers, one at a time.  The image of a sleeping officer, disappearing before your eyes into the ethereal plane after an intrusion by the Hag into the sleeper's dreams, is just super cool - a taste of A Nightmare on Elm Street.
However, if they choose to dig into the affairs of their employers, it won't be hard to discover the existence of the Friends of Mammon; there could be the chance to spy on one of the club's decadent parties, or learn the secret nature of the club as devil worshippers, in the arched chambers below the rural estate.

There's also the club's prized treasure, the indestructible Covenant with Mammon, kept under permanent lock and key at the corporate offices.  They might also learn of the secretive ex-Chairman, who supposedly died last year but has been spotted on occasion leaving the Company offices - most unusual.

The arch devil of hell, Mammon, furious about the double cross, might encourage diabolical agents to stop the characters from stopping Mammon's collections agent, the Night Hag.

If the players learn the Club's true aim - the resurrection of an infamous necromancer, or to cheat a King of Hell, would they try and escape their own contracts with the Company?

Locale:  The city, corporate headquarters of the Company, a lavish estate for the Club
NPCs:  Company Officers as cultists, the ex-Chairman
Monsters:  The Night Hag
Artifacts:  The Resurrection Scrolls, the Covenant
*Picture is from Eyes Wide Shut; fits the theme of the Friends of Mammon Club
Posted by John Arendt at 5:34 PM