Adventure 8 - As the Worm Turns 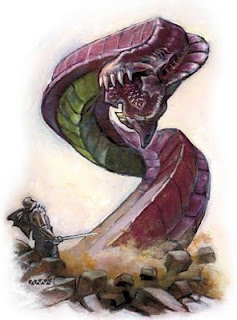 Horror Adventure 8 - As the Worm Turns
How many purple worms does it take to destroy a kingdom?

PLACEMENT
Place this adventure in a settled area with a major city and town, several outlying villages, and a borderlands or march.  Outlying settlements in the kingdom are being devastated in the night; buildings are destroyed, trees knocked down, and the ground is torn up.  No one has survived the attacks yet.

SETTING THE SCENE
Rumors of the destroyed settlements begin to trickle into the interior of the kingdom.  Engagement with this adventure depends on the level of the characters.  For higher level characters, this might be their own domain, or they might be considered peers or champions of the realm.  Lower level characters might respond to rewards or requests for information; they could be trackers themselves or accompany scouts and trackers into the wilds as escorts.

As the characters leave the civilized interior, one of their first destinations is a borderlands village that will act as a base.  A half day before reaching the village, refugees are met on the road, fleeing more destruction - the borderlands village has been destroyed as well.  "It happened last night", the refugees will explain.  "They were giant, they came from beneath the ground…"    They won't have a detailed description, but had the impression of large things, bursting out of the ground, smashing through the village with speed and power, before disappearing again beneath the ground.

After the latest attacks, there will be enough data points to plot the attacks on the map and see that they are following a spiral pattern towards the center of the kingdom; if the attacks aren't stopped, the largest town or city will be right in the path of the rampage!

WHAT'S GOING ON
Not far from the main settlement is an isolated wizard's tower.  Concerned primarily with research and magical experimentation, the wizard has built a deep shaft in the dungeons below the tower.  The shaft leads all the way to the underdark, where he meets merchants and peddlers from some of the deep dwelling races and gains access to rare components.  Recently, he purchased a sack of spherical rocks from a shady group of goblin scavengers.  He eagerly returned the spheres to his lab for study, to identify them and see what value could be wrested from these underworld oddities.

The spheres are purple worm eggs, and now a large pod of purple worms are ravaging their way across the kingdom tracking down the stolen eggs.  There should be enough worms to make them a threat to even a high level party - like a dozen purple worms.

The goblins had stumbled upon one of the rare nesting grounds of the underworld's purple worms and escaped with a clutch of eggs.  The worms breed infrequently and often leave the eggs in remote places; they have an innate ability to track the eggs across great distances.

The theme of this adventure is resource pressure, and the resource is time.  Once the group realizes there is a pattern to the mysterious attacks, there is only a short amount of time to develop a solution before the underground monsters reach the main settlement, and the group is probably a fair distance away.  The DM will have to calibrate the velocity of the worms and the remaining time based on distances on the map.

A secondary theme is information scarcity.  At first, secondary reports of destroyed settlements are heard.  Next, they hear the story of a survivor, but still no definitive monster description.  Ideally, the players would get into position to see a fleeting glimpse of one of the monsters from a distance, and the next encounter would be at one of the settlements where the PCs might be attacked directly.  (And then hopefully they'd be smart enough to run).  Slowly reducing the narrative distance is a good literary technique that translates well to RPGs in just about any type of horror scenario.

RESOLUTIONS
Once the problem is identified, the solution is open-ended.  It could involve evacuating as many people as possible from out of the path of destruction path before the main settlement is destroyed, or mobilizing the army and militia.  It could involve using auguries and divination to gather information about the attacks and possibly identifying the reason behind the attacks.  It seems unlikely the characters would be able to figure out the connection with the eggs and the wizard in time to put the eggs somewhere that would avoid the destruction, but you never know - players are resourceful and magic is powerful.  If they're not stopped earlier, the worms will continue until they destroy the wizard's dungeons and tower, although the wizard himself should easily get to a safe distance.

MORE SEPTEMBER ADVENTURES:
Here's a handy link to all the OSR blogs taking part in the challenge - 25 adventures in September:
Posted by John Arendt at 8:19 AM