There's an idea I can't get out of my head - it keeps rattling around in there since I got exposed to Stars Without Number and the idea of generating a sector of space as a sandbox - how can we take the standard D&D sandbox, blow it up in size, and let the players cut loose with serious mobility?

For purposes of scale, I'll say something like Keep on the Borderlands, with its limited wilderness area, town and cave complex, is a micro-sandbox; a regular sized sandbox is in the 6 miles per hex range, covering 2-4 hex crawl sized maps.  The regular sandbox is a good size if your group is trudging around or even traveling by horse; journeys are measured in hours and days, but rarely weeks.

The Wide Area Sandbox
Mobility defines the scale of the Wide Area Sandbox.  Consider the idea of the "Saltbox" I'm seeing the cool bloggers talk about; the group is traveling from place to place on ships and time is measured in days, weeks, maybe even months. 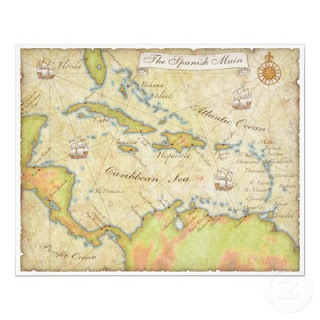 I'll use a historical setting like the Spanish Main as an example; it covered an area roughly 2,000 miles by 2,000 miles; it would be one of my first inspirations for a Saltbox.  You've got excellent home bases like Port Royale, Havana, Tortuga, Charleston, or Porto Bello, international competition between privateers and ships flying national colors, pirates, tons of uncharted islands, dangerous jungles laden with gold.

It seems to me that the current state of the art could handle such a setting quite well - larger and smaller scale hex maps could be created, random tables for island stocking, one could even adapt the Stars Without Number style of tags for islands, and tools for generating a wide range of ships, crews, and missions on the fly.  The DM could have some prebuilt ruins and similar encounters ready to go for when the results called for it.  I've got to fool with Vornheim some more, too, and see if some of the loose ideas on presenting an undefined city could be extrapolated into the wilderness. 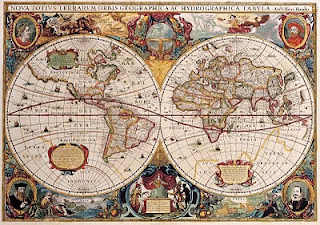 The Macro Sandbox
Let's talk about going bigger.  Let's start the group back in the homeland - I'll use the early modern period as an example, and the group is considering hiring on with the West Araby Trading company after asking around for exciting opportunities - they learn that the following high risk jobs are available:

Travel to an exotic port near the desert lands, where the company is outfitting caravans to head into the desert and conduct searches for lost tombs, from which they hope to recover artifacts that could be thousands of years old.

The church is sending missionaries to a distant jungle land to preach the faith; dangers include pirates, privateers, and hostile natives.  There's the chance to stop on uncharted islands, recover lost pirate treasures, and discover civilizations and lands untouched by the "civilized nations".

So this is one of the things I'm thinking about - what kind of tools would support a macro-sandbox?  Is there a way to take the current state of the art - the techniques we use for sandboxes and saltboxes, and configure them to support play that supports an even grander scale of travel?

I'm also kicking around the idea of what something akin to an early modern D&D game would be like for me - there would be highly civilized lands, where adventures would be necessarily mundane and magic would be rare.  Monsters would be fairly rare in downtown London, for instance.  So the plot hooks would involve traveling extraordinary distances to remote frontiers where the possibilities would still be wide open - the Spanish Main, African continent, the gothic heart of old Europe, the frozen areas near the arctic circle.  Here there be dragons.

Maybe I've answered the question by repeatedly pulling in real-world analogues - that such a far flung campaign would have to draw heavily from the real world so the DM could shortcut a lot of the creation of the mundane cultures and just focus on sandboxing the frontiers - and then whatever techniques would be used for the Wide Area Sandbox would be extended to the frontiers (each frontier is basically a Wide Area Sandbox).

Just thinking out loud at this point.  What's the most ambitious geographic scale you've seen in someone's home fantasy campaign?
Posted by John Arendt at 7:01 PM