Challenges of the Saltbox 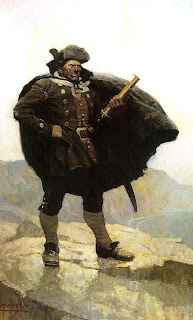 The archetypal D&D game, where a beginning group of adventurers meet in a tavern and head out to the local ruins, doesn't necessitate skills beyond those inherent in the class descriptions; fighters are already good at fighting, magic users cast spells, clerics can affect undead, and so forth.

Not so when you consider staging a maritime adventure.  The roles on a ship demand specialized skills - navigators need to read charts, calculate dead reckoning, mark soundings, and take latitude measurements; crewmen need to know the proper rigging of the sails and ship maintenance; gun crews need to know the elevation and targeting of cannons and the measurement of charges based on range and shot.  The captain is perhaps the most knowledgeable and experienced sailor on the ship, as well as requiring a strong personality and commanding presence.

Old school (rules-light) D&D doesn't provide much support in the rules for adjudicating these situations.  Which is fine, the game is Dungeons & Dragons, not Sloops & Sailors.  I imagine one reason many campaigns don't feature significant ocean travel is precisely due to discomfort by the DM.  If you're going to run the saltbox, you need a plan.

Hiring Experts
The by-the-book answer is to require adventurers to hire navigators, a captain, gunnery crew and sailors; there's no real provision for player characters to have said skills (unless perhaps the DM is using background professions or something like the 1E DMG).  This is fine if the ocean travel is a means to an end, like getting to the Isle of Dread; not so much if most of the campaign will revolve around the sea.

How would you handle this in an old school game?  Hybrid systems that split the new/old school line (like ACKS) have a proficiency based skill system, so player characters could add specific skills over time.  Alternatively, the DM could rule that characters spending enough time ship-board could learn these professions after a sufficient period as on-the-job-training.

Hack n Slash pointed readers towards an old post on A Rod of Lordly Might that broke professional skills down into categories of unskilled, skilled, expert, and master, and provided ideas on costs and times to pick them up (outside of the class and level system).  I like the idea of requiring experts initially, but letting the players add the skills as professions if they really want to allocate time and effort in game to pick them up for their characters, too.

Adjudicating Skill-Based Situations
In the dungeon environment, rules-light skill decisions on the fly are handled through a negotiation; the player describes what they want to do, the DM comes up with a success chance, the players think of ways to enhance success, and we either agree on a ruling or a roll that needs to be made and move on.

In a situation where specialized knowledge affects frequent encounters and combat, I'd like to push more of this resolution towards a defined system of rolls.  Can the crew get more speed out of the ship in a pursuit and evasion situation; can the captain's maneuver to get into a broadside position succeed; was the grappling and boarding attempt successful; did the navigator succeed in guiding the vessel to that remote island across the trackless ocean?

Looking through the BX rules, there are some guidelines for adjudicating these types of maneuvers, but they don't have a variable element for individual skill.  So one approach is to elaborate these generic guidelines for solving common situations, like pursuit, maneuvering, boarding, and navigation, and then apply modifiers based on player choices at the table.

An alternate approach is to add appropriate individual skills to the mix - use something like ACKS's proficiencies, extend the LOTFP d6-based skills to include some nautical skills, or use professional descriptions like unskilled, skilled, expert, or master to provide some common modifiers.

Agency and Autonomy
I've talked about this in the past, that playing crewmen on someone else's ship doesn't provide a lot of agency and authority to the players - they take orders, they don't give them.  As such, maritime adventures are postponed until the group has sufficient wealth to hire and outfit their own ship.

For a low-level campaign, I like the idea of the group starting with vessels small enough for them to afford, or ensuring one of the earliest adventures puts them in ownership of a suitable vessel.  Lots of real-world pirate careers started with canoes and pinnaces, trading up over time to progressively bigger vessels.  I've been working on a kick-off adventure for such a campaign, where the characters start as conventional adventurers, and gain an opportunity to seize an appropriate vessel and become privateers by the end of the adventure.  I'd use privateers because  I tend to think my players would rather be 'legal pirates' with patriotic targets, rather than murderous, indiscriminate raiders.

A useful thing about the 16th and 17th century colonial waters, the Spanish Empire of the time can be portrayed as universal, unsympathetic villains, the way early 20th century films frequently demonize Germany.  The destruction wreaked by the conquistadors was widespread and massive, dimmed only by 5 centuries.  But that's grist for another mill.

Anyway, that's where I'm at - gathering ideas for resolving common maritime problems, consulting what's been done in BX and AD&D 1E while looking at other game systems (currently looking at how Flashing Blades: High Seas handles similar situations).  James at LOTFP threatened to develop a maritime supplement at some point, but I don't see it on the near horizon (though hopefully the LOTFP guns supplement is inching closer...)

I'm also considering how player characters can gain some professional expertise in these non-dungeoneering professions, if desired.  Not only would this stuff be necessary for a Spanish Main setting, it'd be useful in the Black City - in another couple of months, the Spitsberg Pirates will be ready to buy their own longship or knarr and going where they will.

Game masters that have run a heavy nautical campaign seem few and far between; it's an idea that's occasionally discussed, but infrequently executed.  But if readers have suggestions on these issues, I'm thankful for any insights!

Email ThisBlogThis!Share to TwitterShare to FacebookShare to Pinterest
Labels: Essays on Gaming, Saltbox