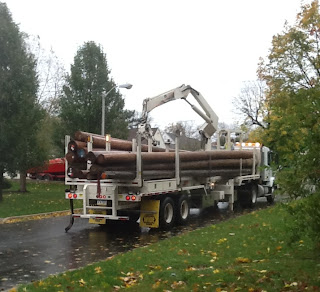 This was one of my favorite sights this week, when the power company dropped off a new pole.  They only got around to working on it yesterday; by late afternoon, we had power back.  They never actually installed the new pole, either; it's just sitting in the road.  The power company saddled a different pole with the downed transformer, while PECO and Verizon squabble over who needs to install the new one (Verizon seems to dragging their feet - they've been out a half dozen times to the site).  It was a long week of camping at home, using the fireplace for heat, cooking on a propane camp stove, and candle-lit evenings in front of the hearth.  A neighbor graciously let us use the hot shower and recharge our phones once they got power back mid-week.

A lot of folks in NJ still don't have power restored, and there are problems with the gas stations; a number of acquaintances have generators they can't run any longer because they're not able to get more gasoline.  After losing a freezer and fridge of food, a generator is looking like a good idea - and make sure you have enough gas on hand.

In the aftermath of the storm, it's fair to wonder if this will be the new norm for Atlantic hurricanes; stronger than ever, battering the gulf or east coast with massive winds.  I'm getting caught up on the news and now see the massive damage and loss of life the storm surges and waves caused near the water; we're 150 miles from the shore, where you have these massive 100'+ trees, four to 6 feet around, that just can't stand up to 75mph winds.  They become house crushers when they topple.  A guy in a nearby neighborhood was killed in bed when a tree crushed his house to the ground.  We have a large tulip tree and maple that would destroy our house if they were uprooted, and it's tragic to think they might need to come down for safety.

But those are worries for next summer, before the next hurricane season.  With power back on, most of the gang drifted back into the neighborhood last night and we got the D&D game back on - I have a few game reports to catch up on this week.

We did get 4+ truckloads of cut timber from around the neighborhood, and I've gotten in plenty of exercise splitting logs - I like to use an 8 lb maul and wedge, with a two handed axe for smaller stuff.  The 10-year old found a rusty axe in the shed left by the previous owner, and he spent hours filing off the rust, sanding the head with sandpaper, sharpening it, and oiling the metal to a fine luster. It was a totally awesome adventurer moment when the axe was ready for him to take his first swing.