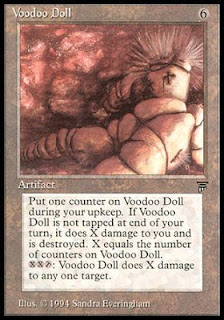 As I continue to take in all things of a piratical nature, I've been reading Tim Powers' On Stranger Tides, the novel that inspired the Pirates of the Caribbean movie of the same name.  I've been meaning to read The Anubis Gates, so this was a convenient entry point to this author's work.  I'm enjoying the book a lot, more so than I did the movie, so I'll write a review/recommendation when done; today is just focusing on the thread of magic and sorcery in the novel.

In the story, it seems that nearly every pirate ship has a resident Bokor, a voodoo practitioner, and many of the rank and file know a few tricks themselves - at least, all the pirates moving in the same circles as Blackbeard have voodoo influences.  Magic is used to cure tropical diseases, heal wounds, bless ships, and protect in combat, among other things.  Hermeticists from Europe also find their arcane powers are increased in the Caribbean.  There's a conceit at work here; the New World in the 17th century is unformed, wild, and primal, and the significance of magic is stronger.  Magical effects described from the times of myth and legend are  possible again in the New World.  The Pirates of the Caribbean movies have a strong supernatural theme running through them, revolving around the influence of the 'heathen gods'.  This is great, great stuff if you're looking to run a historical fantasy game featuring a strong magic component, like D&D, but otherwise don't want to upset the historical apple cart.  The motif that the progress of time, civilization, and/or the Church drives the magic out of the world ripples across many literary genres and works.

The bit that fired my imagination is this idea that "every pirate ship has its resident Bokor…"  It sounds a lot like every adventuring party bringing along a thief, magic user, or cleric.  The Bokors in the story function most like healers and augurs, putting them in the same design space as the cleric in D&D.

I don't profess to know any more about Voodoo, Vodun, or Obeah than what one picks up watching movies and the occasional urban fantasy book; I also realize modern forms of the religions are heavily syncretistic.  It involves rituals and ceremonies invoking various powers of the spirit realm (the Loa), frequently equated to Christian angels, messengers, and saints in the modern view.

What would it take to make pirate-clerics in the Goblins of the Spanish Main campaign Bokor practitioners?  Very little, it would seem - renaming various clerical spells to fit the mood is a simple enough starter.  In On Stranger Tides, for instance, there is a spirit euphemistically referred to as Mate Care-For (the Loa Kalfu or Carrefour) that is frequently invoked to help heal injured pirates in the story.  The ubiquitous Cure Light Wounds could be referred to as "Touch of Kalfu" or even "Mate Care-For's Breath" and you 're ready to roll with it as is.  I can easily see players calling out, "Hey man, we need some voodoo up here - Hawkins just took a cutlass to the face."

There are perhaps a few signature elements of the popular conception of Voodoo that I'd want to address - zombification, voodoo dolls, and spiritual possession.

Animate Dead is typically a higher level (arcane) magic user spell, and calls to mind a necromancer calling forth hordes of skeletons from a desolate graveyard.  I'd probably make a lower level clerical version that allows the Bokor to create a single zombie.  Not sure yet if it would be the zombie powder version of The Serpent and the Rainbow or White Zombie - a living human transformed into an automaton - or an actual undead servant brought back from the dead.

All of the Bokor spells could be cast through a degree of Spiritual Possession, the level or type of spell dictating the degree to which the Loa needs to inhabit the Bokor's body during the spell casting.  For instance, augury or divination spells (when the cleric acts in the role of oracle or soothsayer) could require the caster to ecstatically channel the personality of the Loa.  Could be fun for the roleplaying opportunities.

I like the idea of making the Voodoo Doll a new type of magical construct that clerics can make, like scrolls (and about as difficult as a 1st level scroll - or perhaps the level of the doll = the level of the target).  In modern voodoo, the dolls are used more for sympathetic magical healing than sticking pins in their eyes.  Use of a doll would provide an interesting and flavorful twist to the typical clerical limitation of "laying on hands" by allowing a Bokor to cast different types of healing spells over a distance if an appropriate Voodoo Doll exists of the character.  Getting personal effects of an opponent to make an appropriate voodoo doll of that enemy offers some intriguing adventure ideas.

What about players wanting to play traditional European "clergy" in the Caribbean setting?  I expect that to be the norm, as long as we address the idea that fantasy Europe is lower magic than a typical D&D world as befits the weird fiction space.  It could be that actual miracle workers are rare, or clergy are uniformly low level and not capable of the vast wonders that adventuring clerics can achieve; perhaps magic-working clerics are members of secretive, mystical sects that perform clerical magic, and the mainstream clergy are mundane.  I prefer to keep the workings of the cosmology somewhat vague when developing weird fiction settings, since clear sides of good and evil and transparency about the cosmology undermines horror and mystery alike.

*The image is the M:TG Voodoo Doll card; my oldest kiddo just started playing Magic recently and now it's all he talks about.
Posted by John Arendt at 12:12 PM