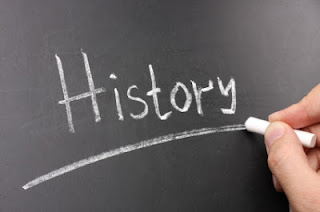 I had the thought to do this article before the big storm, so it's been sitting on my computer while the power was down, waiting to post.  The moms of one of our players said something nice to my wife: "Your husband is doing a good job with the D&D game, the boys are learning so much about history while they're playing".

So I asked the kiddo what kinds of things he's learned in our current campaign.  Here's what he had say:

Real vikings didn't wear horned helmets.  The vikings went everywhere and drank beer or mead - Russia, England, France, and even Canada.  They ate dried, salted, or smoked fish in the winter,  and lots of pickled stuff, like pickled cabbages.  But if you didn't eat fresh stuff every few weeks, from hunting or fishing, you could get scurvy.  Their boats are called longships or knarrs.  The men are either jarls, karls, or thralls depending on whether you're a noble, freeman, or slave.  They do crafts during the winter in those big halls and drink more beer (beer was like food you could store all winter).  They used cone helmets with nose guards, wooden shields, and axes.

I'm sure he knows a lot more, like how island shelters are constructed, how names are formed, what everyday life is like back home, that kind of stuff.  We also watched the recent Nova episode that showed the forging of an Ulfberht sword and the guys talked about it during one of the games, so he now knows a bit about how crucible steel is made and why it was superior to local steel.

I had overlooked this as a benefit of a setting based on real-world history - I like getting ideas from real myths and legends, using real maps and place names, but there's this huge educational upside to also consider if you game with kids.  Besides, if you like history, the research and reading inherent in preparing the setting is pretty dang fun.  The real world is endlessly strange and fascinating.

My home library is slowly accreting 'day in the life' books, like The Time Travelers Guide to Medieval England, Everyday Life in Viking Times, or A Day in the Life of Ancient Rome;  I appreciate the modern approach to scholarship that's painting these vivid pictures of ordinary life by piecing together bits from anthropology, literature, archaeology, art, and written history.  As Black Vulmea said over here - Booke Faire - many children's history books also feature curious bits about everyday life to help kids place themselves in the period;  these sources are really fast and accessible for the harried game master.

I've actually had a few  parents on the block wrinkle their nose when their kid went home and asked if they could sit in on one of the kid-focused D&D games during the summer - like it's the late 1980's again, and D&D is only something for... I dunno, weirdos or something.  Meanwhile, they don't blink when their kids play gory TV-MA video games and blow the heads off zombies or loot bodies in Skyrim.  I'll stop judging.

TL;DR version:  You can slide in plenty of historical knowledge into your tabletop game, ninja-style, the way some moms are known to puree healthy stuff like carrots and mix it into their kid's food sight unseen.
Posted by John Arendt at 10:39 AM