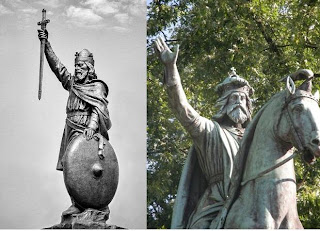 A few weeks ago, a simple poll here was "Which legendary realm is better suited for adventure, Arthur's Britain or the Empire of Charlemagne?"

I expected Arthur to win in a landslide, but the Holy Roman Emperor knocked off the King of Britain, 57% to 42%.  (Um, go Franks?).  Seriously though, there's a strong old school D&D sensibility in Charlemagne's Saxon frontier and the theme of civilization vs the barbarians.  I'm going to put some notes together for a simple, yet literary, setting for the younger kiddos to learn the beloved classic D&D, and a fantastic version of the Frankish Empire would be fun, and serve a bit of education too.  Hopefully we can kick it off while it's still "teach your kids to game" week.

Because the Frankish frontier with the Saxons is one long borderlands area, a few classic adventure modules jump out as being immediately relevant:  B2 Keep on the Borderlands, or B5 Horror on the Hill.  Both involve forts or castles on the frontier facing off against a wilderness where monsters lurk.

Any other adventure modules (TSR, D&D, AD&D, OSR, or whatever) come to mind as being well suited for chivalric adventures, or at least easy to dress them for the part?

I don’t see any issues with plate mail or Medieval stone castles if you're basing the milieu on the anachronistic stories of the chansons de geste, so it's not going to reflect the historical 8th or 9th centuries.

Email ThisBlogThis!Share to TwitterShare to FacebookShare to Pinterest
Labels: Kids and Gaming, poll