Teach Your Kids to Game Week - Palace of the Silver Princess 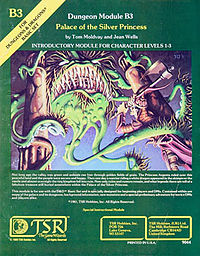 I was traveling all last week, but was able to kick off a short kids D&D game the other night to introduce the young ones to some basic D&D.  They're starting in a simplified version of Charlemagne's France near the bewitching Enchanted Forest, long rumored to hold a secret glade where a mysterious Elven princess held court while protected by glamours and illusions.

For the first game, each character was drawn by a vision to meet at the crossroads, where a ghostly "Protector" explained that a terrible curse had befallen the secret valley where the Silver Princess held court, and now she needed help from brave heroes to explore her palace and break the curse.  The players agreed that sounded like great fun, and followed the Protector down the Elf Road to the entrance to the palace, and thus we began the adventure.

I'd really like to try Keep on the Borderlands and Horror on the Hill with the kiddos in the Carolingian setting, but felt that the more simplistic "fairy tale-like" Palace of the Silver Princess would be a better intro because it's less of a wide open sandbox.  We enlisted my 6 year old adopted son, his sister, my oldest son and one of his friends, their grandma who was visiting, and wifey.

Here's who they brought along:

We used pre-rolled characters with "Ye Faste Packe" so all they had to do was name their new character, sit down and play; I simplified the options quite a bit (presenting things almost in a 'Choose Your Own Adventure Style' of choice); we paired the youngest kiddo (who can't read yet) with an adult to help out.

The best piece of advice I can give is to support and encourage those wacky and unusual tactics kids think up on the fly; they haven't read the rule books and their imagination isn't calcified by the prescribed combat options.  Creative maneuvers show their engagement with the game, which is all you can really ask from the young ones.

Examples from the game included the time Princess Tolula jumped on the monster's back to throw her sleeve over its face, blinding it, to give  one of her fellow adventurers an assist;  Mungo figured out that giant beetles are hard to hit because of their tough shells, so let's flip them on their back and hit the soft squishy parts on the bottom; Johnny thought that if he moon-walked while shooting his bow, he'd be harder to hit;  Father Seton tried to review his equipment during every round - "How about now?  Is now a good time to splash the Holy Water?"

An hour or so is about the attention span limit for the kids under 8, so we wrapped after 5-6 rooms and called it a night.  Everyone is hoping we can make it a regular thing - we'll see how it goes.

Last foray into a kids focused game was more than a year and a half ago, when their older brother and his friends started (a few have since moved into the regular game) - looks like I can trot out some of the same table rules from back then:  Dungeon Mastering for 9 year-olds.

Email ThisBlogThis!Share to TwitterShare to FacebookShare to Pinterest
Labels: Kids and Gaming