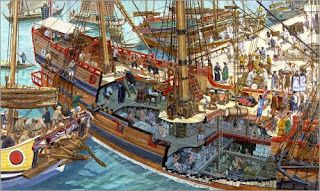 I noticed a funny thing when comparing how different games have handled ship statistics.  For example, let's take a look at a well-known historical ship, the "galleon".  The galleon in LOTFP needs a crew of 150 and can carry 150 tons of cargo.  The d20 Skull & Bones book has the galleon at 400 *tons* of cargo (crew 200).  Flashing Blades: High Seas puts the galleon at only 24 tons of cargo, and offers more nuance differentiating minimal sailing crew from gunnery crews from max crew.  With all these variances, I don't think it's pedantic to question why 3 games defining the same ship would vary by a factor of 16(!) for a vital statistic that ought to be historically verifiable.

Only, it turns out it's not that simple to verify, at all.

For starters, a common ship like the galleon was made in a wide range of sizes over a 200 year period, from 100 ton hulls up to 600 tons and even larger.  In normal usage, the tonnage of a ship is a volumetric calculation related to hull displacement, and not the actual amount of weight loaded on the ship, dead weight tonnage, which makes it sit lower in the water.  There's a calculation for the volume of a ship (length x beam x depth)/100, which calculates the volumetric tons - also represented as tuns - estimating the number of tun-sized barrels that could fit in an area for determining admiralty and harbor fees.  Measuring the loaded weight and water line is something different,  and can only be done empirically (ie, actually measuring the water line as a ship is loaded).

Game designers haven't been particularly clear what they mean by "cargo" - the 150 and 400 ton "cargo" statistics could just be representing hull volume and not how much dead weight the ship could actually carry, whereas the 24 tons for the High Seas galleon probably represents the dead weight amount the rules are suggesting.  I'm just guessing at this point.  When you read historical accounts of pirates and buccaneers, 20 tons of precious treasure was a vast sum; Drake's famous capture of the Spanish galleon Cacafuego netted 24 tons of treasure, and it was carried on a 120 ton galleon.  Other examples to put into perspective:  Black Bart captured 240,000 pieces-of-eight from a heavily laden galleon, which represents just under 8 tons of silver; Ganj-i-sawai, the famous capture by Henry Every in the Red Sea, had closer to 10 tons of coins.

A funny way of considering the problem:  the ton of feathers weighs the same as a ton of coins… but who wants to worry about calculating the volume differences?

In addition to the conflation of terms, there's a paucity of written records - lack of detail on how certain ships were actually rigged and armed, for instance.  Further muddying the waters, many ship types use the same name for a radically different vessel - a pinnace sometimes refers to a towable, single-masted ship's boat used as a tender, but also referred to a 3-mast merchant ship in its own right.  Some of the games have missed that nuance as well.

Back to weight versus cargo, it'd be very easy to go completely down the rabbit hole, and start considering how many cannons are being carried, how large the crew and provisions, and worry about how much those things add to the overall burden.   Cannons are fairly heavy - 1,000 lbs or more per gun - and the games don't indicate whether they've taken armaments into account when presenting their ship values.  A compliment of cannon, shot, and powder could weigh 20 tons or more on even a small sized ship.

There's a strong argument to be made for using a totally abstract system for something like cargo, much the same way encumbrance rules are easier to manage as equipment slots instead of micro-managing pounds and ounces (or kilos, for anyone not mired in imperial).  The Pirates of the Spanish Main RPG went completely abstract with ship sizes and cargo.  Otherwise, you're always going to run into "that guy", who makes pedantic arguments about accuracy and what the game statistics represent.  Oh, wait a second… I'm the one being that guy.  :blush:

As gamers, I wonder how many of you prefer flavor and usability over deep historical accuracy?  I don't see my own players quibbling tons over the tons.  The closest gaming analogy is probably Traveller (again) because of its emphasis on trade and cargoes.  One of my old gamers accused my Traveller game of requiring accounting skills to prepare a ship's manifest; this was back in the 90's, and I missed the forest for the trees with more frequency back then.  I certainly don't want to recreate that experience of endless manifest management while running a nautical D&D game.

This is where I'm at, comparing maritime rules across games.  In a world where some of this information exists, in books, there's no reason not to strive for accuracy, but the system also needs to be simple, usable at the table, and not lose sight the game is about fantastic exploration over bookkeeping, even if there's the chance to engage in some high seas piracy and buccaneering along the way.  Resource management is fun, but only to a point.

BTW, the D&D Expert rules has a large sailing ship, representing the Medieval cog; Cook lists the ship as carrying 300,000 coins of treasure, which reduces to 30,000 lbs, or 15 tons of dead weight - and that's at Basic D&D's inflated 10 coins to the pound size.  The largest cogs seemed to be in the 100-120 ton volume range.

I've had a running conversation with Richard from Richard's Dystopian Pokeverse; he's been able to bring some sanity to the discussion around calculating ship volumes, suggested crew sizes, potential armaments, and so forth - rules of thumb.  Here's perhaps the most cogent advice; when all else fails, use G+ to "Contact Other Plane" and summon a PHD!


*The image is from a National Geographic, (c) Roger Morris.