D&D Pirates and the Sandbox Engine 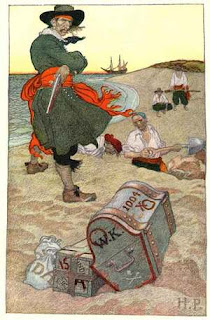 A number of posters have recommended Savage Worlds, and a Savage Worlds licensed setting, Pirates of the Spanish Main (POTSM), for the nautical weird fantasy campaign I've been discussing here lately.  After many such recommendations, I picked up the POTSM book last week - it does a really great job of laying out a Caribbean setting, using the ships and characters from the old POTSM miniatures game of ship combat.  I'm really enjoying it a lot (thanks for all the good suggestions, fellows!)

Old School D&D isn't the best game for a nautical setting, since its early editions omit the kind of skill systems and professions that would help adjudicating action on the high seas.  However, it's the ideal system for running a plotless sandbox game.  The key game conceits for the sandbox are Class Level = Power Level, and XP for Gold.

Class Level = Power Level means that much of the gratification for playing comes about when your character goes up in level, gaining survivability or the option to do new and cooler things.  In other words, regardless of which fiction you drape over the game world, no small part of why players enjoy playing the game is because their characters get to level up.

XP = Gold means that gaining money through adventuring is the best way to gain those levels.  These two factors(Levels and the need to acquire Treasure) create an underlying engine that drives the sandbox game forward without requiring any plot or emotional attachment to a story.  As long as sandbox preparation involves seeding the world with lucrative and interesting opportunities, the player's ambition and the game engine does the rest.  Players choose their own adventures to ensure they'll get money and make their characters cooler.

To keep the sandbox engine moving forward, many DMs also add things that drain party gold - taxes on player wealth like upkeep rules, carousing requirements, things like that.  Seems to me the old Sci Fi game Traveller always did a good job of making sure the players were eager for the next employment, because Traveller characters had an expensive starship to maintain.  Provisioning supplies for a sailing ship, sharing out wealth with the crew, and keeping it maintained ought to do the trick in the pirate sandbox.

These days, I'm (obviously) really enjoying the sandbox approach to running a campaign and focusing on tools and techniques to help in the running - the Black City has been a really successful experiment.  After trying a horror sandbox earlier this year using Trail of Cthulhu - which was more work than the payoff - I stepped back and came to appreciate that campaign structures are a matter of finding the right tool for the right job.  In other words, there are good reasons to use game systems that use plotted adventures.  But for a player-driven sandbox game, D&D has a powerful reward and incentive system that is unmatched in other games - as long as the players buy into playing rogues, treasure hunters, and scoundrels.  In other words, PIRATES.

Email ThisBlogThis!Share to TwitterShare to FacebookShare to Pinterest
Labels: Goblins of the Spanish Main, Saltbox, Theory